Polson City Council members have voted to take on a $94,000 state loan for improvements at the local airport.

The funds will be used for runway, taxiway, apron, lighting, fencing and general safety improvement at the facility. Alderman Clint White said at Monday’s council meeting that Polson also received a $21,000 grant for the upgrade.

The loan comes from the Montana Aeronautics Division at a 4.5 percent annual interest rate.

Some people apparently haven’t heard of the Christmas spirit yet. The first night the community Christmas tree was lit, someone stole a dozen bulbs from it. Last year bulb snatchers made off with nearly $60 worth of light bulbs, which were replaced by the Chamber of Commerce.

One of the landmarks in school buildings in this area was destroyed early Tuesday morning when the Sunny Slope schoolhouse was burned by a fire of unknown origin.

The building was built about 1912 and had been in continuous use as a school building, but for quite a number of years had been used as a community clubhouse, after the district consolidated with Polson.

The Polson rural firemen answered the alarm about 7 a.m. but when they reached the scene the fire had made such inroads on the building that nothing could be done to save it. 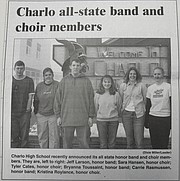