Polson’s JC Steele is flanked by his parents, Cody and Kendra Steele, after signing his letter of intent to play football for the Rocky Mountain College Battlin Bears. (Courtesy of Betsy Wade)

Polson senior receiver/defensive back JC Steele's jersey No. 13 turned out to be a lucky number.

Steele will be extending his athletic career to the collegiate level after signing a letter of intent to play football for the Battlin’ Bears of Rocky Mountain College in Billings.

The Missoula Sentinel transfer was part of the Pirates’ vaunted passing attack this season, a member of a receiving corps that hauled in a state high in receiving yards (3,100-puls) from southpaw quarterback Jarrett Wilson..

Steele’s most productive offensive game came against Browning, where he topped 100 all-purpose yards on a single rush along with nine receptions for 99 yards. His season tally of more than 200 yards might have been much higher had he not been sidelined by injury during two games, and not yet integrated into the receiving corps during the record-setting season opener.

Steele also stood out on defense. His season highlights include recovering an onside kick that opened the game against Ronan and a blocked extra point attempt at Libby. He was named special teams player of the game after the Ronan contest.

JC is the youngest son of Cody and Kendra Steele, following in a family football tradition that featured oldest brother Cy among the Montana Tech football roster for a time, and middle brother Alec closing out his senior season also with the Orediggers.

Head coach Kaden Glinsmann, previously a Frontier Conference assistant coach at Carroll College under Mike Van Diest, is optimistic about the future of his onetime player.

"JC Steele is a great young athlete and fiery competitor. I can see him making an impact either as a corner or as a slot receiver. He'll also make an impact on special teams in the return game."

Other Mission Valley players in the Frontier Conference include the Orediggers’ Landers Smith (class of 2018) and Isaiah Allik (class of 2020), both of Charlo. Pirates predecessors who likewise went collegiate include former Montana Tech defensive back Will Davey (2013-17) and former Oredigger Jonah Burke (class of 2017). 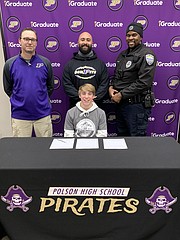