Preston Miller, his wife Carolyn Corey, and Salty Dawg, celebrating the 50th Anniversary of Four Winds Trading Post, pose in front of a Jocko Agency building constructed in 1862. It was built by Major John Owen when he was a U.S. government Indian agent, and it was moved to Four Winds around 1970 from its original location near Arlee.(Craig Tice)

Many selections of Native American crafts are displayed and for sale. (Preston Miller)

The Jocko Agency fireplace was rebuilt, stone by stone, when the building was moved to the trading post site. (Four Winds Trading Post)

Preston Miller documents all of his historic items at Four Winds Trading Post, including the buildings. (Carolyn Hidy/Lake County Leader)

Built by Duncan McDonald in the 1870s, this was the first building Preston Miller salvaged and rebuilt to create the Four Winds Trading Post in 1970. It served as the initial store until it was relocated to the Duncan McDonald building. (Carolyn Hidy/Lake County Leader)

ST. IGNATIUS — The Four Winds Indian Trading Post north of St. Ignatius, established in 1970 by Preston Miller as a source for Indian trade goods and other historic items, turned 50 years old in December.

Now a spry 81, Miller still radiates the enthusiasm of a person who likes what he does. A lifelong collector and trader with a keen interest in history and indigenous culture, crafts and traditions, he has helped preserve not only relics but a way of life.

The Trading Post is full of antique and contemporary goods including clay pipes, blankets, drums, moccasins, dresses, hides, ribbons and beads. Miller sees renewed interest in old-time bead colors and related materials for recreating things that were used by Natives and mountain men in the past. Four Winds is a supply house for sequins, brass tacks, flint and steel strikers, tomahawks, trade beads, sweet grass, sage, antique beads, bells — the more you look the more you find.

Many Flathead Indian Reservation residents, including descendants of previous generations who shopped and traded at Four Winds through the decades, still trade in the store, as do members of tribes from all over Montana, the Northwest and Canada. They know Miller can get hard-to-find items such as the “Fox Brand Braid,” a Hudson Bay Co. ribbon for which he may be the only source in the world.

“Your purchases help us encourage and preserve these traditional arts and crafts,” Miller said.

Four Winds’ clients also include tourists and representatives of the film industry, and business was good this summer. He has helped supply authentic

costuming and artifacts for many movies, including “Dances with Wolves,” and this summer the TV series “Yellowstone.”

Miller has a degree in history, and his wife, Carolyn Corey, studied anthropology and archaeology at the University of New Mexico and UC Berkeley. For decades, they put out descriptive catalogues of items for auction, taking bids by phone and mailing items to the highest bidder. Together they wrote several full-color price guides about the value and significance of artifacts that were printed by Schiffer Publishing. Still in print are “The Four Winds Guides to Indian Weaponry, Trade Goods, and Replicas,” and “The Four Winds Guide to American Indian Artifacts,” both available at the trading post.

An accomplished beader himself, Miller has sold thousands of his “Manual of Beading Techniques” that includes historic photos of the Flathead Indian Reservation.

Four Winds is housed in a collection of historic log buildings Miller rescued from crumbling into the soil.

“We started with an empty field,” Miller said. “I didn’t have any money for buildings. Then people started offering me old buildings they had sitting around on their property that were just falling down and rotting away.” The first building was on Squeaky Joe Matt’s place in St. Ignatius, built by Octave Morigeau in the 1870s.

“He heard I was looking for a building to start a store in out here. He said, ‘You can have it if you want it, just haul it away.’ I got a couple guys together and we would tear it apart and mark the logs, haul them up here in our pickup trucks and put them back together.”

That building became the initial store.

Miller and his family spent the first couple of winters much like the pioneers, in a second log building he moved from Ravalli that was built in the 1870s by Duncan McDonald, a Hudson Bay Co. trader and entrepreneur. They lived without running water or electricity.

“It was hard; we barely stayed warm,” he said.

The store now resides in another Duncan McDonald building Miller salvaged, built in Ravalli in 1870s. The trading post stocks old and new books about local history, including Duncan McDonald and his father, Angus, the famous local Hudson's Bay trader who built nearby Fort Connah.

Miller reclaimed and rebuilt the original 1862 Jocko Indian Agency building, where Chief Arlee first lived with his family when they came to the Flathead Reservation. It contains furnishings from the period and a collection of authentic Hudson’s Bay Co. artifacts.

Mary Finley, from St. Ignatius, the last survivor of the Swan Massacre, sold him the home in which she was born. Built in the 1870s by her father, Antoine Stoussee, it now contains artifacts from early reservation Indian homes.

Miller became a student of Native culture, crafts and history as a child in Pennsylvania. As a Boy Scout, he learned many native skills, including dancing. At age 11 he bought his first collection of Indian goods at a neighbor’s auction with $15 he had saved. From then on, his interest in old-time goods and all things Indian became a lifetime passion. He started buying, selling, trading and collecting all manner of historic and intriguing items from auctions, flea markets, Natives and other collectors.

After college and a stint in the Navy, Miller took a job teaching sixth grade on the Rocky Boy Reservation in Montana. When his first wife got a teaching job in S t. Ignatius in 1970, he purchased property north of town and established the trading post. Miller said it is the oldest continuously operated trading post in Montana. 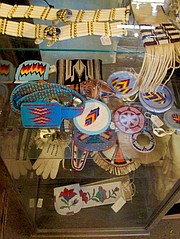 Many selections of Native American crafts are displayed and for sale. (Preston Miller) 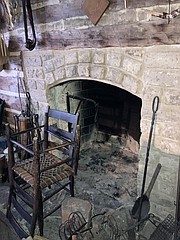 The Jocko Agency fireplace was rebuilt, stone by stone, when the building was moved to the trading post site. (Four Winds Trading Post)

Preston Miller documents all of his historic items at Four Winds Trading Post, including the buildings. (Carolyn Hidy/Lake County Leader) 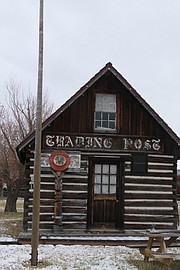 Built by Duncan McDonald in the 1870s, this was the first building Preston Miller salvaged and rebuilt to create the Four Winds Trading Post in 1970. It served as the initial store until it was relocated to the Duncan McDonald building. (Carolyn Hidy/Lake County Leader)