KALISPELL ANGLERS Larry Ludahl, left, and Shane Stratton show off their catch of lake trout Saturday, June 6 at the boat launch in Somers. Both men are competing in the Mack Days Tournament, designed to reduce numbers of the fish in Flathead Lake. Ludahl caught 36 lakers while Stratton boated 35. One of Stratton’s fish went back into the water since it was a slot fish, measuring 32 inches. (Scott Shindledecker/Daily Inter Lake)

Columbia Falls fisherman Dan Smith places lake trout in a cooler at the Somers boat launch Saturday. The launch is one of the places where Mack Days anglers can turn fish in to members of the Salish and Kootenai Tribal Council. Smith caught 18 lakers. (Scott Shindledecker/Daily Inter Lake)

No one has boated the $10,000 lake trout yet, but anglers are back in force on Flathead Lake in the Confederated Salish and Kootenai Tribe’s Mack Days tournament.

The COVID-19 pandemic suspended the tourney for a number of months, but it was extended to Sunday, June 28.

Anglers are vying for $225,000 in cash and prizes. The contest began March 20 before its suspension March 27. The Confederated Salish and Kootenai Tribal Council recognized the importance of these events to the reduction of the non-native lake trout and chose to proceed cautiously with the understanding that anglers will follow strict safety protocols regarding the COVID-19 issues.

In addition to the $10,000 laker, there are three fish worth $5,000, five worth $1,000 and more than 6,000 additional tagged fish with values from $100-$500. All anglers who turn in 11 or more fish qualify for bonus amounts for their totals. Every fish anglers enter gives them a chance to win in the lottery style

drawing that begins at $450 and goes up to $1,000. Shore anglers are getting several entries in along with the boat anglers.

Kalispell’s Jason Mahlen continued his winning ways with more 100-fish days. One hundred fish days are fun but also a lot of exhausting hard work for the anglers. They know how many fish they need to catch during the morning bite and how many per hour throughout the rest of the day to get that perfect number. They don’t stay if they aren’t catching-they move to other spots they have found over the years. They have put in the time finding those areas and know what time of day to move to them.

Being a successful lake trout angler on Flathead Lake takes effort, time, and patience to learn what works and what does not.

Mahlen has seven 100-fish days while Mike Benson of Lonepine has four. Scott Bombard of Missoula. Kolton Turner of Kalispell and Sam Cusker of Bigfork each have two. Andy Reed of Kalispell, Scott Mahlen of Kalispell and Larry Karper of Florence each have one day of 100 fish.

Brodie Smith has 79 in the 12-and-under group, Tsimmiej Yang has 11 macks, Mike Ross has eight and Arley Grandchamp has two.

Two large lake trout have been entered for the coveted large fish prize. First one in was by Ber Yang of Missoula. His fish measured 39 1/4 inches and it weighed 24.5 pounds. Paul Jochim of Stevensville boated a 38.5 inch laker that weighed in at 25 1/4 pounds. His boat included two young anglers who were not much taller than the fish was long.

Mack Days are a management tool used to reduce the numbers of non-native lake trout in Flathead Lake to increase native bull trout and westslope cutthroat trout. A total of 3,631 lake trout were turned in over the weekend bringing the total to 12,925 for the event so far. There were 792 on Friday, 1,475 on Saturday, and Sunday’s total was 1,364.

Residents of the reservation can turn in at the boat ramp areas or at Blue Bay from 11 a.m. to 8 p.m. Anglers can also boat to the dock at Blue Bay, call in and staff will come to the dock to pick up your catch. Call for more information on fish pickups.

The largest lake trout award goes to the heaviest fish. The category ends on the last day of the event.

There will be no fish fry or awards on the last day of the event, Sunday, June 28. Prizes will be done electronically and mailed to winners.

Entries continue to be taken until the last day of the event.

Go to www.mackdays.com, click on the event’s tab for the drop down boxes or enter when your fish are turned in. 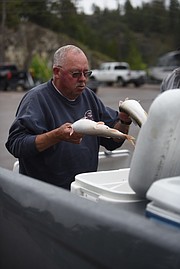 Columbia Falls fisherman Dan Smith places lake trout in a cooler at the Somers boat launch Saturday. The launch is one of the places where Mack Days anglers can turn fish in to members of the Salish and Kootenai Tribal Council. Smith caught 18 lakers. (Scott Shindledecker/Daily Inter Lake)