After sweeping Shields Valley in their opening match of the Western C divisional tournament on Nov. 3, the Charlo Lady Vikings earned themselves a showdown with the defending state champion Eagles of Manhattan Christian at home on Thursday night.

The match was bookended by a pair of lopsided sets in favor of the Eagles, but Charlo showed its prowess in the two middle sets. The Lady Vikings’ back line was strong, digging out more shots than not and keeping crucial points alive. And they had to be good because the Eagles really bring the heat.

The Eagles came into the match undefeated and having lost just three sets all season, including two in their season-opening match.

After losing the first set 25-10, Charlo had a better time in the second but ultimately fell 25-20. The Lady Vikings’ true victory of the night came in the third set. After stumbling to an early four-point deficit, Charlo climbed back into it, thanks it part to consecutive aces by junior Kassidi Cox, and pulled to within two at 11-9.

The teams battled from there, with senior Carlee Fryberger stringing together some kills and other Lady Viking shots finding the floor in all the right places. After a 16-16 tie, neither team led by more than two points the rest of the set. Fryberger landed four kills down the stretch to propel Charlo to a 26-24 win.

The Lady Vikings savored the moment.

Then the Eagles came back with a vengeance and seized the final set, 25-6.

“We haven’t seen a blocker or a hitter like that almost all season long, and so for them to be able to battle and take a game from the returning state champion -- heck yeah,” said head coach Rhondell Volinkaty after the match. “We adjusted for that all week long. They can hit the ball and they hit it down.I couldn’t be prouder.”

Charlo recorded 31 kills, 18 of them from Fryberger. Connor Fryberger had 19 of Charlo’s 29 assists to go with nine digs. Cox hit four of the Lady Vikings’ seven aces on the night.

The Eagles recorded 46 kills, including 20 from Kiersten VanKirk and 15 from Katelyn VanKirk

The loss left Charlo needing two wins to get to state.

After the semifinal loss to Manhattan Christian, Charlo took their home court again Saturday night for a loser-out match against conference rival Hot Springs, whom the Lady Vikings swept for the district title a week earlier.

Leads early on in each set allowed coach Volinkaty the luxury of playing some younger players and building on her team’s depth.

“I was happy to have a chance to get some playing time for some younger players, Volinkaty said afterward. “Tournament time is hard, and it’s always good to get those girls some experience.”

Charlo’s final test before advancing to the class C state tournament in Malta came Monday night, when they hosted Lone Peak in a 2nd/3rd challenge game. Lone Peak had lost in straight sets to Manhattan Christian in the Western C divisional championship game Saturday, leaving the door open for Charlo.

Charlo opens the state tournament against Plentywood at 4 p.m. Thursday.

The trip to state comes in the wake of a two-week coronavirus quarantine that wiped out several of the team’s final regular-season matches and nearly derailed their postseason quest.

All state volleyball tournaments originally were scheduled to take place in Bozeman, but the pandemic forced officials to reschedule all three classes for separate sites. 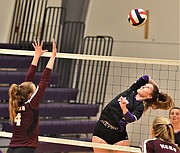 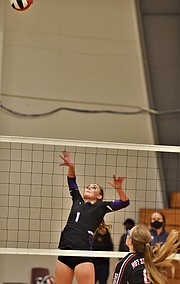