Speaking for the silenced

The Mission Bulldogs football team, led by sophomore Cedric McDonald, has been raising awareness of Missing and Murdered Indigenous Women throughout the season by speaking with opponents about the issue prior to games both at home and on the road. The Bulldogs and their opponents have been painting a red handprint across their faces prior to games. (Scot Heisel/Lake County Leader)
Scot Heisel/Lake County Leader

Both teams shared the field in a show of solidarity as Yamancut performed a song prior to kickoff. (Scot Heisel/Lake County Leader)

ST. IGNATIUS — When 23-year-old Jermain Charlo, a mother of two from Dixon, went missing from the streets of Missoula on June 16, 2018, friends, family and an entire community were left with a wave of questions, few answers and an undeniable sense of hopelessness.

It’s an experience many communities had lived before, and too many have lived since.

More than two years later the search for Charlo continues, and her case has played a vital role in raising awareness of the Missing and Murdered Indigenous Women movement in Montana.

Among those left searching for answers is Charlo’s younger cousin, Cedric McDonald of St. Ignatius, who was in middle school when she disappeared. Over time McDonald, now a sophomore at Mission High School, came to understand that his cousin’s case was just the tip of the iceberg — indigenous women are murdered and sexually assaulted at alarmingly high rates across the U.S. and Canada — and he felt compelled to do something about it.

This football season, with the help of good friend and teammate John Komotios, a senior, McDonald found his voice and a way to help others understand the seriousness of the issue.

With the blessing of teammates and the coaching staff, the duo began reaching out to opponents in an attempt to raise awareness.

“I wanted to do something last year,” McDonald said Friday before the Bulldogs’ home game against Arlee. “But I was too nervous, too shy.”

McDonald and Komotios have developed a short presentation they deliver to opposing teams prior to games. They hand out fliers with information on Charlo’s case, links to additional information and an image of the red handprint that is a symbol of the Missing and Murdered Indigenous Women movement.

As a show of solidarity, all members of both teams then use paint to apply the handprint across their faces. The teams then meet at the center of the field prior to kickoff as an acknowledgment of the movement to that night’s crowd. Friday’s meeting at midfield was accompanied by a song from Yamancut.

“These women are out there,” McDonald said. “We just want people to know that they matter. All of them. Every one of them matters.”

“It’s just so messed up, all these girls being taken,” Komotios said of his own involvement. “I just wanted to help spread awareness, so people are more aware, because everyone matters.”

For more information on the Missing and Murdered Indigenous Women movement, visit www.csvanw.org. 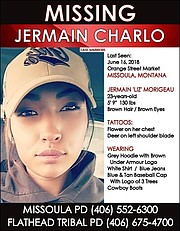 Both teams shared the field in a show of solidarity as Yamancut performed a song prior to kickoff. (Scot Heisel/Lake County Leader) 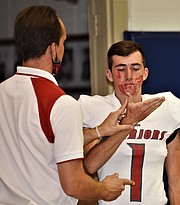