Chad Killorn of Arlee receives the Lake County Sheriff’s Citizen Lifesaver Award from Sheriff Don Bell for his part in rescuing a driver from a burning vehicle. “I just hope someone would do the same for me,” Killorn said.

A collision on U.S. 93 at Eagle Pass Trail near Ninepipes Lodge on Aug. 23 led to a daring rescue of the driver before emergency personnel were available. (Photo provided)

A motorist was pulled from a flaming car by bystanders moments before an explosion engulfed the entire scene on Highway 93 Sunday, August 23.

Sheriff Don Bell honored Chad Killorn of Ravalli with the Lake County Sheriff’s Citizen Lifesaver Award for his part in a team effort of about half a dozen people, all unknown to each other, who saved the life of a driver pinned under the steering wheel.

The Sheriff’s Office reports that a Dodge pickup truck, leaving Eagle Pass Trail at mile marker 41, failed to yield to oncoming traffic while turning south onto Hwy 93. “A southbound Chevy Suburban pulling a camper collided with the rear end of the Dodge causing the entrapment of the driver of the Suburban. The rest of the family in the Suburban were able to escape the Suburban as it caught fire.”

The Suburban driver and passengers were from Dickinson, North Dakota. Bell says the driver of the Dodge, who was a local, was taken into custody.

Killorn’s efforts were noted in a cellphone video taken by Leslie Martin of Polson.

“Minutes prior to the arrival of any emergency services,” says the award citation, “a group of citizens were attempting to utilize fire extinguishers to tamp down the fire. Others were trying to open the door of the Suburban to extricate the trapped driver to no avail. All of this while increasing amounts of smoke and flames became present.”

Killorn and another unidentified man were able to pry the door of the Suburban enough to get a strap looped through the window opening. Killorn pulled his flatbed truck into position and after one failed attempt, was able to pull the car door open.

Killorn explained the urgency of the situation. “Somebody tied up my bumper to the door with a strap, that gave loose the first time. I was worried at this point that we wouldn’t be able to get him out in time, everybody was out of fire extinguishers, and the flames were getting more intense.”

Danny Kastner of St. Ignatius, another involved in the rescue, said about nine fire extinguishers from Ninepipes Lodge were used up. “I said, ‘OK angels, you gotta help save this guy.’ You could see the fire was going to be engulfing the cab with him in it within about two minutes,” Kastner said.

“The door finally got pulled off,” Killorn said, but the man’s leg was stuck under the steering wheel. Killorn had already tried unsuccessfully to break the steering wheel or the seat to release him. “We pulled his leg, he yelled, but we just knew we were going to have to pull as hard as we could, no matter what the consequences.”

The man was successfully pulled from the vehicle just before the front tire blew from the heat. He was taken to Polson by ambulance.

Ninepipes Lodge owner Brian Morton says many accidents happen in front of the lodge. “Two or three times a year there seems to be a major accident at that spot,” whether drivers are turning into or leaving his establishment or Eagle Pass Road, where there are many homes. He hopes something can be done to raise motorists’ awareness of traffic at that site, even prior to a rebuild of the highway.

Kastner agrees, saying “It’s hard not to appreciate how important a turn lane would be there. Let’s hope that this gentleman’s very near-death experience can catalyze the importance of creating turning lanes in those critical areas.”

“Though it was a team effort by many Good Samaritans that saved this motorist’s life,” the citation concludes, “the quick and assertive actions of Chad Killorn stand out among this effort as exemplary by all measures. Chad took a leadership role in directing the effort and put in place the old-fashioned Montana ingenuity necessary to solve a problem that was not going to wait for emergency services.”

“I just hope someone would do the same for me,” Killorn said. 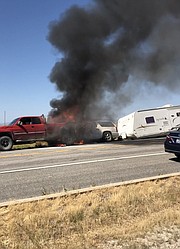 A collision on U.S. 93 at Eagle Pass Trail near Ninepipes Lodge on Aug. 23 led to a daring rescue of the driver before emergency personnel were available. (Photo provided)