Members of the audience lined up to pose questions on the microphone at the end of Monday's meeting. (Scot Heisel/Lake County Leader)

Following nearly 48 hours of worry, exhaustion and frustration, Finley Point residents who had been displaced by the Boulder 2700 Fire received some welcome good news Monday night when Lake County Sheriff Don Bell announced that most would be allowed back into the area starting Tuesday afternoon.

The announcement came during a community meeting at Polson High School that drew approximately 300 people to the school’s gymnasium. Several hundred others attended the meeting remotely via Zoom, though technical limitations and the acoustics of the setting made it difficult for many to hear the Zoom audio.

Bell said those who provided some proof of residency could acquire a vehicle pass at a checkpoint near mile marker 2 of Highway 35. Many expressed concern over their ability to prove residency since they had fled so quickly Saturday night and many had left most personal documents behind. Bell assured everyone that authorities would work with them, and that any digital receipt on their phone — power bill, package delivery receipt, etc. — would be sufficient. The sheriff stressed the importance of keeping nonresidents out of the area until the fire was contained.

Bell said access to Finley Point will be available as far north as Mahood Lane, slightly more than halfway between mile markers 7 and 8.

Rick Connell arrived Sunday with the type 2 Northern Rockies Incident Management Team that assumed management of the fire Monday. Connell, who’s serving as incident commander, warned residents that access could be brief given the fire’s volatility.

“If we get warm, dry weather again, this fire can still move,” Connell said. “We’re going to be watching this for a very long time.”

Tuesday morning the fire was listed at 1,416 acres with 0% containment, and the National Weather Service was forecasting high temperatures in the 90s with no precipitation and mild wind for Tuesday through Thursday.

“As much as you want in, you need to be ready to move out again,” Connell said. He also reminded everyone to stay out of the fire area. “If we see people in there wandering around, we have to shut operations down.”

Connell said the stretch of the highway north of Finley Point between mile markers 8 and 13 would remain closed for “days, not weeks,” though he added that pinning down an accurate timeline for that access is nearly impossible. Several structures were lost along that stretch of the highway, though a precise accounting of the damage has yet to be released.

Moderator Robyn Broyles, a fire communications specialist with the Bureau of Indian Affairs, said after the meeting that crews were still conducting a survey of homes and other structures and that more accurate figures would be released in the coming days. Initially, it was reported that up to 20 structures, including about eight homes, had been lost.

Craig Morigeau, superintendent of operations and construction for Mission Valley Power, said the fire caused significant damage to the Finley Point main line, leaving the area without power. He said MVP crews were coordinating with Incident Command and would begin repairs to the main line Tuesday morning.

Besides access, the other theme of the night was communication. Many present expressed frustration over how they were initially alerted (some simply by word of mouth) and a lack of useful information in the aftermath of the evacuations.

Broyles said the best place for the most recent official information is the interagency government website inciweb.nwcg.gov. Connell’s type 2 team also arrived with several public information officers, and he assured everyone that communication would improve.

Clary said he issued alerts Saturday before heading to the scene and saw a lot of people already on the way out by the time he got there.

“(Hyperlink) saved some lives,” Clary said. “I know it did.”

Along with the type 2 team, Hot Shot Initial Attack teams out of the Flathead and Helena regions also are on scene, along with a bulldozer and three type 6 engines. Helicopters and Cooper planes continue to gather water from the lake in Skidoo Bay for fire suppression. Bell said the bay is closed to all boats.

“People need to stay out of there,” he said. “And let me tell you, the consequences will be very severe. We still have aircraft in there, and if you take a boat in you might end up crashing a $15 million plane and putting lives at risk. Let them do their jobs.”

Also serving on the panel at Monday’s meeting were Shelly Fyant, chairwoman of the Confederated Salish and Kootenai Tribes, and Shana Radford, superintendent of the Flathead Agency for the BIA, along with several fire managers. Fyant opened the meeting with a welcoming and said all members of Montana’s Congressional delegation had reached out to offer assistance.

CSKT Planning and Inventory Division Manager Tony Harwood described the dire conditions of the area and how the fire grew out of control.

Harwood said a combination of severe regional drought and hot weather has led to “the most critical conditions in decades.”

The fire originated early Saturday morning in the vicinity of a Forest Service road in the southeast quadrant of the current fire zone. The fire’s cause is unknown and remains under investigation.

Harwood said crews had the blaze contained to the south by early evening. A night crew was on the scene when “an exceptional wind event” with gusts up to 30 mph pushed the fire from the ridge tops to the east down toward the lake shore. The strong wind blew out embers that crossed the containment line.

CSKT Division of Fire Director Ron Swaney was among the initial responders who arrived after things got out of hand Saturday night.

“We all rushed in, got under the fire and identified where it was coming out.” They also identified at-risk structures and began telling people to leave the area.

“We could tell we were in trouble,” Swaney said. “Things were going pretty fast.”

He said the fire kept spotting and spreading. The fact that the fire was moving downhill made it particularly difficult to control and created a critically dangerous situation for firefighters.

“Every fire department from Bigfork to Arlee was responding to help you folks out,” he said.

“This is something we haven’t seen in this area for forever, it seems like. We put a line around this fire and thought we were in good shape. Mother Nature reminded us that she’s in charge.”

Several panelists expressed gratitude to Connell’s team and the initial responders who risked their lives to save as many properties as possible.

“They put themselves in the line of this fire, so much that they’re blessed,” to still be alive, Sheriff Bell said. “Please be patient with them. Many of them have worked 40-plus hours” in just a few days.

Regarding donations, Connell said his crews don’t really need anything.

“We give them 5,000 calories a day, so they’re taken care of. I’m not saying they don’t appreciate a pizza or some ice cream once in a while, but if you want to help you should focus on your neighbors, the local fire departments and the Red Cross.”

Members of the audience lined up to pose questions on the microphone at the end of Monday's meeting. (Scot Heisel/Lake County Leader) 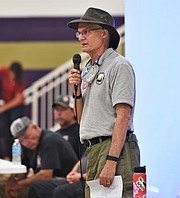