An osprey chick near Ninepipes is entangled in hay baling twine. (Courtesy photo)

With a worried parent looking on, biologist Beth Mendelsohn of the Owl Research Institute based in Charlo works to untangle baling twine from an osprey chick at Ninepipes. (Courtesy photo)

CHARLO — Thanks to a live camera feed at explore.org, people from all over the world were watching an osprey family with young chicks in a nest near Charlo last week when trouble struck. One of the chicks was tangled in orange baling twine. After a successful rescue, a chick was again entangled Monday in another piece of twine newly added to the nest.

“The osprey cam has a lot of viewers online,” said Beth Mendelsohn, a biologist with the Owl Research Institute (ORI) based in Charlo. This includes camera operators who move it around, and people collecting data, but also just interested observers.

The adult osprey pair are named Charlie and Charlotte, in honor of their Charlo home. While Charlotte is often seen in the nest shading the chicks with her wings, one of Charlie’s jobs is to bring back nesting material, usually sticks, to build up and maintain the nest and impress his mate, Mendelsohn said.

“They really like to bring back baling twine. I think it’s just the right thickness, and nice and soft.”

The birds easily become entangled in the twine, especially the young chicks, which are moving around in the nest and not flying yet, Mendelsohn said. Adults will also get tangled and have been found hanging from nests with the twine around their foot or neck. An estimated 10% of osprey chicks in the region die from baling twine, she said.

“It’s a pretty well known issue,” Mendolsohn said. “So once those observers saw the baling twine in the nest, we knew we needed to remove it.”

Charlie had brought the twine when the chicks were first hatching, a time when they are especially vulnerable. They are unable to thermoregulate, so need the parents for warmth, cooling shade and for protection from predators. The rescuers decided to wait a couple of weeks to avoid detrimental effects to the chicks.

But after 10 or so days, someone noticed the chick moving around with the twine attached to it.

“The problem went from not a good situation to a really bad situation,” Mendolsohn said.

With ORI leader Denver Holt in Alaska working on a decades-long owl research project, the crew consulted with osprey expert Rob Domenech at Raptor View Research Institute in Missoula and Brooke Tanner, raptor rehabilitation specialist at Wild Skies Raptor Center in Potomac. Everyone agreed that they needed a lift quickly to get to the nest 35 feet up and remove the twine.

Chad and Sarah Killorn of Chadz Wrapz and Signs left their dinner on the table and came to the rescue, bringing one of their bucket trucks to the site by 8 p.m., where Mendelsohn and intern Chloe Hernandez met them.

“It was worse than we thought,” Mendelsohn said. “The baling twine was actually wrapped around the chick’s leg. It was pretty tight so it had probably been tangled for a while.”

Mendelsohn was able to get all the twine off, but the leg had some swelling from the twine. Again consulting with the experts, they decided massaging the leg and then leaving the chick in the nest offered the best chance for recovery.

All was well, until Tuesday, when a chick in the same nest was seen tangled in newly arrived baling twine. This time, the Killorns' trucks were not available. After much searching, an available Rick Jennison Tree Service truck on a job in Hot Springs was located, and it arrived around dusk.

Mendelsohn again untangled the chick and removed the twine. As of press time, the chick was on its way to a rehabilitation center, with its condition unknown.

Mendelsohn said ospreys are killed every year by twine in nests humans can see, and likely many more in remote and unknown nests. She recommends folks gather up their twine and keep it where birds cannot access it.

The best view of the Charlo osprey nest is actually on the “Great Horned Owls at the Roger’s Place Cam." Several owl nests in the area have cameras trained on them, though only the great horned owls raised chicks this year. Those chicks have since grown up and left the nest, so the camera now is trained on the osprey nest.

The long-eared owls and great grey owls that had nest cams last year did not breed this year, Mendelsohn said, possibly because of a “low prey year.” With fewer voles, they will not have successful nests, she said.

“It’s natural, common to have fluctuations through the years.”

The owls’ loss was a boon for the ospreys, though, as it has given the beleaguered chicks a chance to grow up into the mighty fishhawks their parents raised them to be.

Visit explore.org/livecams/owl-research-institute/great-horned-owl-cam to watch the osprey nest, and owlresearchinstitute.org for more information. 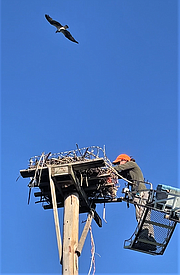 With a worried parent looking on, biologist Beth Mendelsohn of the Owl Research Institute based in Charlo works to untangle baling twine from an osprey chick at Ninepipes. (Courtesy photo)