The Polson tennis team quietly carried out one of the most dominant performances of the spring in any sport over State Title Weekend in Billings.

It probably shouldn’t have come as a surprise, as a week earlier the girls achieved the rare feat of advancing a trio of doubles teams out of divisionals — seeds 1-3 — to go with a No. 1 seed boys team.

Head coach Bob Hislop and his assistants had his players ready for the step up in competition at state, and the results were nearly the same.

Seniors Berkley Ellis and Qia Harlan defeated teammates and fellow seniors Ara Mercer and Megan Rost 6-1, 6-1 Saturday to claim the doubles title. Meanwhile, teammates Taylor Collinge and Clara Todd, who fell to Mercer/Rost in the semifinals, worked their way through the consolation bracket and took the first set of the third-place match before ultimately losing 4-6, 6-3, 6-2 to Molly Powell and Bailey Jessop of Corvallis.

The 1-2-4 finish gave Polson the girls team title in a landslide. The Lady Pirates wracked up 37 team points, followed by second-place Whitefish with 19 points.

“I think our goal all along was to play our best, and we thought if we did that we’d be able to beat out a lot of other teams,” Ellis said Saturday afternoon in Polson.

“It was just our weekend,” Mercer said.

Ellis and Harlan won the title without losing a set along the way. The path to the title match was a bit bumpier for Mercer and Rost, who won their quarterfinal and semifinal matches by identical scores of 3-6, 6-3, 7-2.

“It was almost euphoric,” Rost said of the comeback victories.

The team’s lone boys duo — senior Michael Smith and freshman Torrin Ellis — did their part to carry the Polson banner as well, going 3-1 in the tournament and finishing second after a 2-6, 4-6 loss in the title match to Ben Noteboom and Kent Swisse of Hardin.

“They just loosened up and they played very, very well,” Hislop said.

In the end, Polson duos lost to teammates as many times (twice) as they did to teams from other schools.

Hislop said the success is a result of putting in the hours year round and taking kids to tournaments to give them extra experience.

“If they’re willing to put in the work, we’ll get them to where they need to be to compete,” he said.

Class A State tournament at Billings 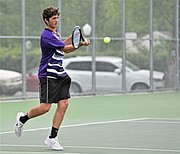