Polson shortstop Josie Caye makes a throw to first base against Flathead. (Courtesy of Bob Gunderson)

Kobbey Smith heads toward first base after smacking a liner to right field against Browning. (Scot Heisel/Lake County Leader)

Five Lake County softball players, including four from state champion Polson, are among eight Northwest A athletes named to the 2021 all state list announced last week.

Junior pitcher Katelyne Druyvestein was named the Northwest A Conference’s Most Valuable Player to go with all conference first team and all state honors. Druyvestein finished the season with a record of 22-1-1 and went 4-0 with 49 strikeouts in 30 innings and a 0.70 ERA during the state tournament in Butte. She also had a .357 batting average and drove in a pair of runs with a triple during the tournament.

It’s the second all state designation for Caye, and her third time on the all conference list. She scored more than 100 runs and drove in more than 100 over the course of her career.

Ronan’s Macao Jackson, a senior pitcher and corner infielder, also was named to the all state team, along with Alyssa Blankenship and Aspen Dawson of Columbia Falls and Libby’s Taylor Munro.

Jackson ends her career as a two-time all state pitcher with 200 career strikeouts and a career batting average nearing .450.

Jami Hanson of Polson was named Northwest A Coach of the Year after navigating the Lady Pirates to a record eighth state title, the program's first since 2012.

Individual programs are allowed a maximum of four all state designations.

Smith tied with Orien for the team lead this season with 43 RBI. It’s her second all conference nod.

Polson seniors SaVanna Carpentier (second base) and Mossy Kauley (first base) were named to the Northwest A second team, which also includes Ronan junior Kiara Sherman.

Carpentier finishes her career as a two-time all conference player. Kauley drove in the game’s only run in a 1-0 win over Laurel in the undefeated semifinal game at state.

Receiving all conference honorable mention nods were juniors Anna Vert and Turquoise Pierre of Polson, and Ashlee Welker of Ronan.

Northwest A Coach of the Year

First team Northwest A and all state honors 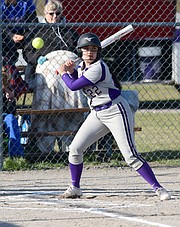 Kobbey Smith heads toward first base after smacking a liner to right field against Browning. (Scot Heisel/Lake County Leader) 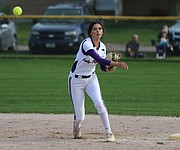 Polson shortstop Josie Caye makes a throw to first base against Flathead. (Courtesy of Bob Gunderson)