Natalie Helser does some prep work for a spaghetti meal her team prepared for nurses in Ronan. (Courtesy photo)

ST. IGNATIUS — Students in the St. Ignatius High School leadership class were among the first applicants to qualify for grants from Spring House Resource, an Arlee nonprofit to help youth within the Flathead Indian Reservation reach their academic and personal potential.

Last January, Sara Keast’s leadership class was learning about running projects as a team. They brainstormed many different people and groups they cared about and ideas for projects they might undertake to give those people a bit of a lift.

After due consideration and a vote, they narrowed the ideas down to three worthy projects that covered a wide variety of ages and circumstances. Team leaders stepped up, and each student chose the project team they wanted to work on. Each team included students from all high school grades, but all three happened to be led by sophomores.

The teams worked up plans and budgets to implement their ideas and used that information to apply for grants from Spring House Resource to help bring those plans to fruition. With a little coaching, and answering requests for more details, the groups received notice that the Spring House board had approved funding for all three projects.

Bryce Umphrey led a team that chose to connect with the 18 residents of two assisted living facilities for care of the elderly, Closer to Home and Pines of Mission. Over the last quarter of the school year, they wrote letters to each resident and sent gifts such as adult puzzles and coloring books, stuffed animals and fuzzy slippers. They were able to visit one of the facilities before undertaking the writing campaign, and were invited back to have lunch at the end.

“There’s a guy at one of the homes that said they don’t get a lot of visitors, so it was really nice to have us show up and talk to them,” Umphrey said. “He’s a beast on the piano, though,” he noted. Umphrey said once students realized that most of the residents rarely get visitors, “that became our main goal — just to become friends with them. We thought it was important.”

The youthful energy and interest brought conversation not only with the students, but among the residents as well.

“When we were eating with all of them, they were telling us stories about themselves,” Umphrey said. “Every time they would tell something, another resident would say, ‘Oh really? I didn’t know that about you.’”

“It was really a cool thing to see,” Keast said.

One week Umphrey’s team helped elementary kids in the after school program write letters; some older students who weren’t even on Umphrey’s team pitched in and wrote as well. Some residents sent personalized letters and gifts back.

“They continued to write back and forth even during the last week just because they enjoyed it,” Keast said. “Both sides got as much out of it as the other.”

There is talk of continuing the letter project next year.

Sophomore Lanie Keast led a team that wanted to thank the night-shift nursing staff at St. Luke Community Healthcare in Ronan for all of their hard work through COVID-19 and all else by preparing and bringing them dinner on two Sunday evenings. They used grant funds to purchase the food.

The first meal was homemade spaghetti with rolls and salad. The nurses were so busy that night, they were unable to greet their benefactors, so the group just left the food for them.

However, when they delivered the second meal, sandwich platters, the appreciative nurses were able to find a few moments to say hi.

“That night, we got to talk with some of the nurses for a few minutes and take a picture with them,” Lanie Keast said. “They were really happy. It made me happy to see how happy they were.”

“Our main goal was to give back to the nurses,” she said. But she also said she came away having learned a lot about working with, and leading, a team. While she had worked on community projects herself before, it was different with a team that could help with ideas, but also counted on her to coordinate, delegate and make everything come together.

“I don’t usually tell other people what to do, so delegating was kind of hard,” she said.

Canyon Sargent’s team developed two lesson plans to share their interest in athletics and health with the fourth and fifth grades.

One lesson discussed the damaging effects of sugar on the body. They used the grant to purchase examples of various foods kids often eat, and then demonstrated how much sugar was in a serving of each by measuring the same amount of sugar into a plastic bag.

The second lesson discussed the benefits of exercise and how much they should get each day. They shared different types of exercises with the youngsters, who even came up with some of their own. The project culminated with a fun run, including T-shirts for the participants, paid for by a second grant the group received from CSKT Tribal Health.

“It can be difficult to work with younger kids sometimes because they’re so energetic, but it was still really fun,” Sargent said. “But we wanted to do this at a young age, when they are impressionable, and be able to talk to them as older high school kids, about ways they can build healthy habits at a younger age.”

The team leaders each presented the results of their projects at a public school board meeting.

Spring House Resource was founded by Arlee teacher Anna Baldwin. For more information on their program, visit them on Facebook or at springhouseresource.org. 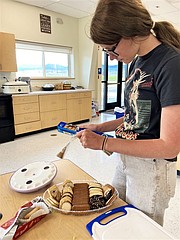