Ronan's Jaeleigh Gatch defends against an outside shot during the Maidens' divisional title game against Columbia Falls on Saturday. (Teresa Byrd/Hungry Horse News)

Jaylea Lunceford puts up a shot in the paint against Butte Central. (Courtesy of Bob Gunderson)

It was a bit of a Cinderella run at divisionals last week at Butte for the Maidens.

Senior Jaylea Lunceford led the way with 17 points and eight rebounds, while LaReina Cordova contributed 11 points. Areanna Burke shot 5 for 11 from the field and finished with eight points.

By the end of the weekend, the trio landed on the all-tournament team, voted on by media members and non-referee tournament officials. Lunceford was named to the first team, Cordova to the second, and it was an honorable mention for Burke.

The Maidens stormed out of the gate and built a 16-5 lead after one period. They also outscored the Maroons 29-19 in the second half and forced 22 turnovers.

In a semifinal game, they faced Hamilton, a team that had beaten them by 10 points in January. After a tight first period, Ronan dominated the rest of the way and won 54-32.

The team then faced unbeaten and top-ranked Columbia Falls in the title game Saturday night. The Wildkats had already topped Ronan twice during the regular season, by 21 points at Columbia Falls and by 18 at Ronan just nine days prior to the final.

Ronan saw a well-rounded scoring effort. Lunceford and Burke each scored 11, and Olivia Heiner added 10. The Maidens also got nine points from Coffman and six from Cordova.

Ronan (12-8) will be the No. 2 seed from the West at the Class A state tournament at Great Falls. They open play against Hardin at 5:30 p.m. Wednesday. 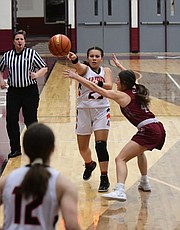 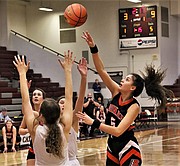 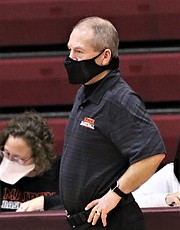 Jaylea Lunceford puts up a shot in the paint against Butte Central. (Courtesy of Bob Gunderson) 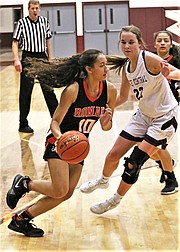