The semiannual event is used as a management tool to reduce the numbers of non-native lake trout and increase numbers of bull trout and westslope cutthroat trout. This spring’s event concluded with a total of 27,547 lake trout entries recorded.

Julie Perkins of Kalispell won the Ladies category with 302 entries, followed by Connie Jones of Kalispell (74), Nicole Peters of Missoula (51), Lisa Cloo of Clinton (39) and Laurie Kreis of Huson (36).

Jack Kirkland won the 70-and-Over category with 557 lake trout entries, followed by Larry Ashwell of Missoula (416). Jack Kirkland and Marty Herak own the two drawings in the category.

Brodie Smith of Kalispell won the 12-and-Under category with 211 entries, followed by Wyatt Best of Florence (7), Tripp Bick of Arlee (5), Henry Phan from Kalispell (5) and Bridgett Reed of Kalispell (5). Tyler Varga won a drawing for a Siberian cooler.

The Spirit of the Event Award went to Jason and Scott Mahlen. The Mahlen family lost Scott on May 6 due to illness. His pole was in the boat with Jason the next day. There were 100 fish and a $200 tagged fish brought in at the end of that day of fishing. 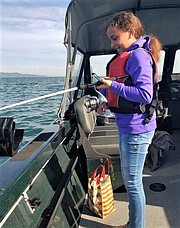