Polson's Sophia Moderie (7) watches her shot go past the Libby goalkeeper and into the net. (Scot Heisel/Lake County Leader)

Senior boys Jack Colton and Kaden Nelson landed on the all-conference teams. Colton, who played all over the pitch for the Pirates, was named to the all-conference second team. Nelson, who split time between forward and goalkeeper, received an honorable mention.

Senior Sophia Moderie was Polson’s lone all-state selection. Moderie led her team with 22 goals and nine assists on the season. She also was the only all-stater from the conference — both boys and girls — who didn’t play for powerhouses Columbia Falls or Whitefish.

Mercer, a forward, was second on the team with 13 goals to go with six assists. 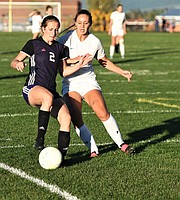