The Mission Bulldogs take the field before their 8-man state quarterfinal game at Fort Benton. (Courtesy of Daisy Adams)

The Mission Bulldogs put a scare into the No. 1 team from the north on the road Saturday at Fort Benton. One week after knocking off Joliet 34-12 on the road in the first round of the state 8-man playoffs, Mission (7-3) came out swinging against the Longhorns (8-1), a team that beat them 61-6 during the 2020 playoffs.

Mission quarterback Kellen McClure threw for 276 yards and three TDs as the Bulldogs built a 22-6 first-half lead before falling 42-26 in the state quarterfinals.

McClure hit Canyon Sargent from 34 yards out to start things off. After the Longhorns put six points on the board, Charley Adams punched in a score from 1 yard out. Then McClure found Sargent again for a 55-yard score.

McClure’s third TD pass was a 70-yarder to Bryce Umphrey.

Fort Benton’s defense put the clamps on the Bulldogs from there, and the Longhorns’ running game began to click. Fort Benton outscored Mission 22-0 in the second half for the win.

Sargent had seven catches for 146 yards and two scores. 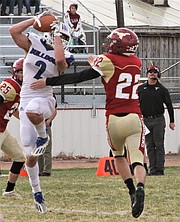 The Mission Bulldogs take the field before their 8-man state quarterfinal game at Fort Benton. (Courtesy of Daisy Adams)