The Pirates take the field prior to their Class A quarterfinal game against Billings Central. (Scot Heisel/Lake County Leader)

Polson linebacker Keyen Nash (33) holds up the football after recovering a fumble in the third quarter against Billings Central. (Casey Kreider/Daily Inter Lake)

The Pirates celebrate after defeating Billings Central 49-28 in the Class A state quarterfinals Saturday in Polson. (Scot Heisel/Lake County Leader)

Jarrett Wilson tries unsuccessfully to get off a pass and avoid a sack against Billings Central. (Courtesy of Niki Graham)

The Polson Pirates are on the march, and after another convincing win Saturday afternoon at home, they’re two tricky steps from a Class A state football title.

After beating up on the best teams from the West all season, Polson (10-0) controlled a top running attack from the East in the Billings Central Rams (7-3) and pulled away in the end for a 49-28 state quarterfinal victory. It was Polson’s first playoff game in five years, and with the win they avenged a loss against the same team that eliminated them five years ago.

Dual-threat junior quarterback Jarrett Wilson faced some of the toughest pressure from a defense he’s seen all season but still managed to pass for 389 yards and six touchdowns on 42 attempts. He also rushed for 89 yards.

Receiver Colton Graham finished with 14 receptions for 202 yards and three TDs. Robert Perez had six catches for 47 yards and two scores, while Xavier Fisher pulled down seven passes for 90 yards and a score.

The Rams defense made a point of getting after Wilson early and often, and they caught up with him more times than he’s used to. The pressure also likely contributed to a pair of interceptions from Wilson, the first of the season, to go with 47 touchdowns.

“I’m sore,” Wilson said after the game. “They hit hard, they play hard.”

While the offense once again put up eye-popping numbers, the defense managed to corral the dual rushing attack of Clay Oven and Kade Boyd. The Rams rushed for 235 yards on 48 carries, 206 from Boyd, but they didn’t score a rushing touchdown until Boyd’s 1-yard plunge in the fourth quarter. The Rams’ other three scores were on passes of 34, 20 and 22 yards by Adam Balkenbush, when Polson’s run-focused defense was caught off guard.

Wilson showed his versatility on defense, particularly when he stripped the ball from Boyd, who was bottled up by other Polson defenders, and took the ball 53 yards for a defensive score.

“I took it right from him.” Wilson said. “Someone else hit him, and then I just pulled the ball out. I almost fell over. I wasn’t even sure if I was going to get the ball and it kind of caught me by surprise.”

Polson led 35-14 on two Wilson TD passes barely over a minute apart. Polson scored on the first possession of the second half on a short TD pass to Perez, at 10:50 of the third quarter. They then completed an onside kick that was recovered by the Pirates’ Brock Henriksen.

That set up another Perez TD catch, covering 22 yards at the 9:29 mark.

“We know that we’ve got to steal possessions,” said head coach Kaden Glinsmann, who tried an onside kick in the first half as well (Central recovered, but eventually gave up the ball on downs). “Teams, shoot — Libby, Ronan, every team that we play wants to bleed the clock. They don’t want our offense on the field. That’s part of our identity; we have to do it.”

“It was intense,” senior lineman Braunson Henriksen said. “It definitely wasn’t our best game, but we came out on top so I’m proud of our boys for coming out and performing.”

The Rams frequently ran the ball to the outside, and they had a lot of success there despite not finding the end zone much on the ground. Laurel figures to offer the same challenge to the Pirates defense on Saturday.

“They’re a run-heavy team, and they’re pretty much wishbone and try to run outside,” Henriksen said of Laurel. “If we can stop that, we should be good.” 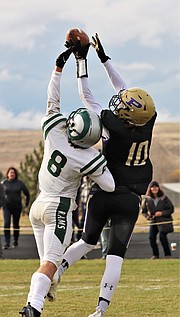 Jarrett Wilson tries unsuccessfully to get off a pass and avoid a sack against Billings Central. (Courtesy of Niki Graham) 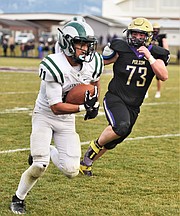 The Pirates celebrate after defeating Billings Central 49-28 in the Class A state quarterfinals Saturday in Polson. (Scot Heisel/Lake County Leader)

Polson linebacker Keyen Nash (33) holds up the football after recovering a fumble in the third quarter against Billings Central. (Casey Kreider/Daily Inter Lake)

The Pirates take the field prior to their Class A quarterfinal game against Billings Central. (Scot Heisel/Lake County Leader)