Turnips and radishes might not be the first things some think of growing in a hay field. Peas and collard greens, anyone? Oats and sunflowers?

A tour of two Pablo- and Ronan-area farms last week put on display some of the many benefits Lake County farmers are experiencing with a wide variety of cover crops and no-till seeding. Not only are the soils receiving regenerative nutrients and decompaction, but the cows and calves are loving it.

The Natural Resource Conservation Service (NRCS) in Ronan is working to encourage agricultural producers in Lake and Sanders counties to explore the use of cover crops and other strategies toward improving soil health on cropland, hayland and pasture. The tour, coordinated by NRCS and Lake County Conservation District, provided a chance for ag growers, agency specialists and interested public to see firsthand how various seed mixes and planting schedules are improving soils while still providing forage and hay.

Some growers have begun implementing other soil health practices as well, such as reducing tillage by using no-till seeders to seed cover crops through the remains of a harvested field, rather than letting it lay fallow or tilling or burning it off.The tour’s first stop was on acreage farmed by Justin Elway and his wife, Becky. A lush field of 2- to 3-foot-tall grasses mixed with leafy greens greeted the interested group, regrown after it had been cut for hay in July.

This is the second year the Elways have experimented with cover cropping, which they seeded directly through wheat stubble after harvest, without first tilling it under. Seed mixes included not only the annual grasses triticale, barley and rye, but also peas, oats, forage collards, sunflowers, turnips and radishes. The cover crop produced a “great cutting” of hay, Elway said, which will help ensure he doesn’t have to pay $300 or more per ton for hay next winter. The area will soon be grazed by cow/calf pairs this fall, managed fairly intensively by moving electric fencing.

The diversity in the mix provides the opportunity for crop success even if less than desirable conditions occur for one or more of the species, and the cows will have their pick of their favorite foods throughout the fall and into winter.

“The cows go crazy for the sunflowers,” Elway said.

He and Becky often see cows with their mouths full of the giant flowers when the heads are still mealy and sweet with “buckets of honey.”

Elway and NRCS resource specialists discussed multiple benefits to soil health from such a regime. For instance, the peas increase nitrogen levels in the soil, while the root vegetables help break up compaction, improve moisture holding capacity, and convert excess chemical fertilizer to a form more usable by plants. Often these excess fertilizers would otherwise be lost due to leaching, volatilization (evaporation) to the atmosphere and runoff. Capturing these nutrients saves the farmers money while preventing environmental degradation.

The root vegetables are killed by hard freezing, adding composted organic material as they rot in the winter and spring, and creating holes that improve aeration and water penetration. Well-timed grazing can keep weeds from going to seed. More feed can be produced, with less erosion, than if the field were left fallow or tilled until the next year.

A similar tale was demonstrated at the farm of Cody Sherman, who has been using cover crop management for six years on a pasture that has been heavily compacted.

“We beat this field up pretty good,” Sherman said. “We either pair out onto it, or calve onto it, so we’re putting a lot of foot traffic and compaction on it in the wintertime. We’re trying to come back and help break that back up.”

Turnips and radishes, with their large, deep roots, are a great tool in that effort. Sherman said the soil has noticeably changed.

“It’s not as tight. It breaks, or meals, better when you no-till into it. It’s not just a hard cut.”

Sherman showed a second field from which triticale had been harvested this summer. A mixed cover crop was seeded into the stubble with a no-till seeder Sept. 1, even using up leftover seed from various crops such as barley. Though planted in the heat and dryness of late summer, the crop has come in thick and green.

Sherman said that planting a variety of species helps with the unpredictable nature of the weather, and with variations in soil sites within a field. “With five or six different varieties, some of the tougher growing areas might take a different stand than the rest.”

Often, Sherman said, he can plant cover in the fall and graze it 30 days in the spring before planting something else.

“We’re trying to build soil health and also grow forage for the cattle. You can do both things at the same time. And if we can produce this much forage, and the cows travelling on here are putting the manure and urine back on the ground, that helps quite a bit, too, on the fertilizer end of things.”

Soil chemistry tests are used to determine how well the soil is responding to the regenerative practices, and spring fertilizer amounts are adjusted to account for what nutrients the tests show are already in the soil profile.

With the ability to harvest or graze productive cover crops after the main crop is harvested, Sherman said he has to be careful not to take too much advantage of the bounty. More organic matter can improve the soil’s carbon content, but because they are taking off quite a bit of plant material for feed, that measure is improving slowly.

“It’s not a fast process unless you’re going to let it idle and put all of this ‘green manure’ back in.”

Sherman and Elway agreed on one drawback to this new way of doing things. As Elway put it, “If you come by here in another month or two, it’s going to stink as the tubers decay into the soil.”

“Our field trials have shown that planting a cover crop can provide benefits to the soil and wildlife and can also maximize profitability for the producer,” wrote Ben Montgomery, District Conservationist at the NRCS Ronan field office in a Targeted Implementation Plan (TIP) to help growers implement cover crop regimes in their operations. “Increasing the use of cover crops will reduce bare ground, improve nutrient cycling, reduce erosion, produce increased feed for livestock and build healthier soils.”

A growing number of producers are employing cover crops on a regular basis. The goal of the TIP is to expand the use of cover crops within the two counties to cumulatively treat over 2,500 acres within a five-year timeframe. Tests to measure and compare changes in soil health indicators such as organic carbon, total organic nitrogen, and overall microbial respiration will be conducted on a sampling of fields before and after implementing the use of cover crops.

The NRCS is partnered with both the Lake County and Eastern Sanders County Conservation Districts in this endeavor (LCCD and ESCD). Intermountain West Joint Venture (IWJV) provided funding assistance for LCCD to hire a Resource Conservationist to help provide technical assistance throughout the five year program. LCCD makes available a no-till seeder for rent to area producers. 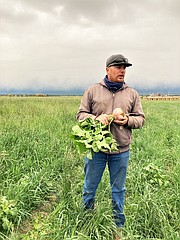