The Lady Pirates volleyball squad found a way to right the ship and earned a five-set victory Thursday over Stevensville in their inaugural match at the new Linderman Gym.

Sophomore Mckenna Hanson came up big for the Lady Pirates in the deciding set. She had a kill to put Polson up 5-4 followed by a block on the next point, and another kill to give her team a 9-8 edge and a lead they would not relinquish on their way to a 15-12 fifth-set victory.

Junior Grace Simonich ended the game with a shot to the corner.

Camilla Foresti, an exchange student from Italy, had eight kills and three aces for the Lady Pirates. She also recorded 20 blocks. After the match, a raucous student section welcomed their new European classmate with chants of “It-a-ly.”

Hanson and Simonovich each recorded 12 digs for Polson.

Polson junior Clara Todd recorded five kills, three blocks and two digs in the win. Todd suffered a serious knee injury during an eighth grade basketball game and has had two surgical procedures since, the most recent coming 18 months ago.

Todd said she’s feeling “really well,” though her days playing soccer and basketball are over. She also was a member of Polson’s state champion tennis team last spring.

In other matches last week, the Lady Pirates defeated Hamilton 3-2 at home Saturday, then lost to Corvallis 3-1 the same day. 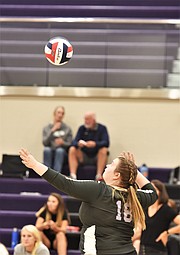