MSU troupe brings ‘Shakespeare in the Park’ to St. Ignatius and Charlo

On a pleasantly cool and mostly sunny Friday evening, Lake County residents gathered at the Good Old Days Park in Mission for a performance of "King Lear" put on by Montana Shakespeare in the Park — an outreach program from Montana State University’s College of Arts and Architecture. About 150 people attended the production and most turned the event into a picnic bringing all sorts of munchies for their individual or family dinners.

As the stage loomed bare before the play began, one piece of furniture stood out and announced through its construction that this was a true Montana production. How so? Much of King Lear’s throne was constructed of welded horseshoes painted gold! It was a striking prop.

The lead character in the play, King Lear, was performed quite well by John Hosking, an MSU graduate who first performed with the troupe in 1974—just two years after the company was formed. This year marks the 50th anniversary of the MSIP touring company.

Although "King Lear" is a tragedy, there were many light moments that brought laughter from the crowd. With play-goers including grade schoolers, senior citizens, and all ages in between, it was delightful to see the rapt attention on most faces.

The touring company moved to Charlo on Saturday to perform "Twelfth Night" — a more light-hearted play. Whether lovers of Shakespeare or just taking in a different kind of event, both crowds were treated to an entertaining, and relatable performance.

The Shakespeare in the Park events and programs are free to the public due to the support of numerous donors. The company does accept donations at the performances as well as on-line.

Locally the Ninepipes Art Group and several individuals put in many hours planning and organizing the events and providing a wonderful way to close out August and summer. 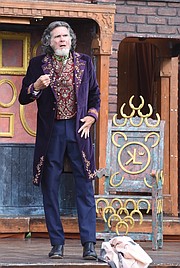