Charles O. “Chuck” Whitson, 88, peacefully passed away at his home in St. Ignatius on Dec. 29, 2021, while surrounded by family. Chuck was born April 9, 1933 to Lewis and Willien Whitson. He was the oldest of five children, spending his childhood in Seminole, Okl., with his beloved grandparents, Tom and Mimi King.

Chuck attended high school in Seminole, where he was an athletic standout in football, basketball and track and field. His yearbook motto read: “He’s tall, but he’s not in the clouds.” Chuck was inducted in the Seminole High School basketball Hall of Fame for basketball in 2006.

After graduation, Chuck attended the University of Oklahoma on a basketball scholarship. During this time, many young men were being drafted into the armed forces. Despite being protected from the draft due to his university status, Chuck believed that joining the military was the right thing to do, so on Jan. 15, 1953, he enlisted in the Army. He served as a gun master for three years in active combat in Korea, where he earned three separate medals of commendation. After he was honorably discharged, he followed his mother to Montana. He enrolled at the University of Montana and walked on to the University of Montana men's basketball team and played one season.

Chuck soon discovered that law enforcement was his calling in life, so he attended academies in both Montana and Minnesota, graduating in 1961. He was a Montana Highway Patrolman for 27 years, retiring with the rank of sergeant. Under Chuck’s leadership, his detachment of patrolmen won the prestigious “Colonel’s Trophy,” an award given to the highest performing MHP unit in Montana.

Not willing to leave a life of public service, Chuck was elected as the Lake County Justice of the Peace and served three consecutive terms. He was highly regarded as a tough but fair judge, and during his tenure he married more than 200 couples. For years after he stepped down from the bench, people would seek Chuck out to thank him and tell him that their interactions with his court had forced them to straighten out their lives. After retiring from the court, Chuck found he was not quite ready for retired life and ran for Lake County Commissioner, where he served another six years.

A devoted public servant, Chuck was a member of the Polson Order of Elks, the Masonic Lodge and the Shriners. He was instrumental in the organization and fundraising for the East-West Shrine Football Game each year. He was quite proud of reaching 50 years of service with the Masons. He was always the first to offer assistance to anyone needing help with fundraising, organization or good, old-fashioned hard labor.

Chuck was an avid golfer who also enjoyed hunting and fly fishing. He also had a brief stint raising llamas. In his down time, he loved watching his old westerns. Chuck was a diehard supporter of the Montana Grizzly football team. He was always ready with a smile and a bit of “walking around money” for the grandkids or for anyone who needed a hand.

Chuck married his first wife Diane in 1953, and their marriage produced two daughters, Wendy and Brenda. He married the love of his life, Maxine Brander, in 1995. He introduced Maxine to the game of golf, and they enjoyed many golfing vacations and adventures together.

The family is eternally grateful for the help given by Partners in Home Health Hospice Services, with special thanks to Kathy Fink.

Chuck was preceded in death by his parents and his brothers, Don and Ray Whitson.

In lieu of flowers, donations may be sent in his name to the Shriners Children’s Hospital in Spokane.

A celebration of life will be held at a later date. Memories and condolences may be sent to the family at www.shriderthompson.com.

Arrangements are under the care of Shrider-Thompson Funeral Home. 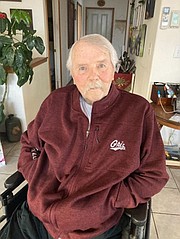