Turquoise Pierre runs toward first base on a triple against Plains-Hot Springs. (Scot Heisel/Lake County Leader)

The champs are back, and they mean business.

Senior Katelyne Druyvestein, an all-state selection and league MVP last season, returned to the mound at Larry Smith Field for a doubleheader Saturday and pitched eight innings of no-hit ball to lead the Lady Pirates (2-0) to a 10-0 win over Plains-Hot Springs and an 8-2 victory over Butte Central. She recorded 18 strikeouts.

Polson’s entire starting infield graduated after the Lady Pirates secured the program’s eighth state title last season, so the coaching staff, led by Jami Hanson, has had a lot of rebuilding to do. This year’s team is far from young and inexperienced, however. Polson has six seniors and three juniors on the roster.

Sophomore Carli Maley got the start at third base in both of Saturday’s games, and she swatted Polson’s first home run of the season, a solo shot to right center against Plains-Hot Springs. Maley went 4 for 5 from the plate with two RBIs and a pair of walks on the day.

Starting shortstop Nikki Kendall, also a sophomore, had five hits, including a double, and drove in three runs over the two games. She also stole a base and scored twice.

The Lady Pirates also got a two-run homer from senior Jaivin BadBear, who got the start at second.

Starting catcher Mckenna Hanson, a sophomore, had a double and a triple and drove in three runs. She also stole a base and scored four times.

Sophomore Avery Starr started at first base. She had three hits and a walk and scored a pair of runs.

Senior Turquoise Pierre relieved Druyvestein for the final four innings in the late game against Butte Central. She struck out four and allowed two runs on two hits and three walks to earn a save. Pierre also hit a triple and drove in a run in the early game.

Elsewhere in Lake County, Ronan opens its season Saturday at Stevensville, while Mission-Arlee-Charlo was set to begin the season with a road game at Eureka on Tuesday night after the Leader went to press.

Turquoise Pierre runs toward first base on a triple against Plains-Hot Springs. (Scot Heisel/Lake County Leader) 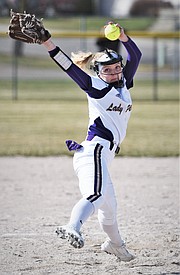