Whitefish placed second with a team score of 310 and Hamilton finished third with a score of 316.

For the Ronan High School golf team, Alyssa Pretty On Top carded a top ten girls finish with a 98 to lead the Maidens, while Colter Cornwell was the top finisher for the Chiefs with a score of 85 tied for 21st. 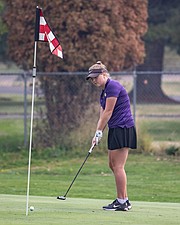