ARLEE - The community of Arlee came out in support of their Warriors as they battled conference and cross county rival Mission Bulldogs during their annual homecoming football game on Friday night under the lights.

The Bulldogs prevailed over the Warriors 72-22.

On the night for the Warriors, Kaiden Ostby and Jake Knoll each snagged touchdown passes from quarterback Kendall O’Neill. Knoll also returned a first quarter kickoff for a 68-yard touchdown. 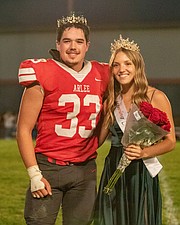