"I thought Coach Detweiler and his staff had their guys fired up and ready to go,” said Polson Pirate head coach Kaden Glinsmann. “They really played hard."

Pirate quarterback Jarrett Wilson threw for 239 yards and two touchdowns to lead the Pirates to their fourth consecutive win on the season. Wilson also ran 10 times for 46 yards and four touchdowns.

On the night for the Pirates, senior kicker Tia Mercer split the uprights five times moving her overall season PAT total to 23-of-27 according to online stats service Hudl.

"I think one of our bright spots this year is Tia Mercer,” noted Glinsmann. “She's done a great job of being coachable and a great teammate. Besides Jarrett, she'll be a top leader in scoring on our team and we're all so proud of her."

Charlo Vikings running back Keaton Piedalue rushed for touchdown runs of 5-, 1-, and 58-yards Friday night in a 60-24 loss to the visiting Drummond-Philipsburg Titans.

The loss was the first of the year for the Vikings which are now 3-1 on the season.

“I thought that our team played well overall,” said Mission Bulldog head coach Carson Oakland. “Going into rivalry games are always a fun atmosphere to play in. We came out with a hot start and that set the tone for the rest of the game.” 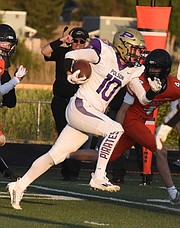