Rusty Hunt of Hunt's Timbers and Scott Randall of RPA take a look at the newest plans for redoing the Hwy. 93 Ninepipe corridor. (Kristi Niemeyer/Leader)

“I went to a meeting in 1986, right out of high school,” said Rusty Hunt of Hunt’s Timbers as he inspected preliminary plans for the Hwy. 93 corridor that runs past Ninepipe Reservoir. “They said we were going to get a new road then and we’ve still got the same one.”

Representatives from the Montana Department of Highways and Robert Peccia & Associates consulting firm were on hand last Wednesday to discuss a new feasibility study for the 4.5-mile stretch of Highway 93 between Gunlock Rd. and Brooke Lane. The good news is the new plan shaves around $50 million off of the cost of the 2008 design. The bad news is there’s not enough money in MDOT’s annual budget to get it done.

Scott Randall of RPA says his firm has worked closely with the Confederated Salish and Kootenai Tribes and other stakeholders to look for a more cost-effective plan for the stretch of highway. Their starting point was the plan that was developed in 2008 to accommodate wildlife and water flow in an area where the highway spans a national wildlife refuge and two ponds.

“The question was what do we know now and what modifications can be made to make it easier to build and more cost effective,” he said.

The solution they came up with would cost around $86 million, $50 million less than the original design, and uses a wildlife overpass (similar to the structure on Evaro Hill) to help critters travel safely from one side of 93 to the other.

“There’s a tremendous amount of savings there,” Randall said.

“A lot of homework was done in taking it to a level where we feel good about what we’re recommending,” said Randall. While the feasibility study falls far short of a full design, “this gets us to the next point where we feel like we know the issues, we know the challenges, and we feel good that we can make this happen. Now we need to get the funding to do it.”

According to MDOT Missoula District administrator Bob Vosen, the Tribes have applied for a $65 million grant for the project. If successful, that allocation would move the Ninepipe corridor from the back burner much closer to the front.

Vosen said that while the huge infrastructure bill passed by Congress last year boosted his annual budget, it basically just kept pace with inflation. However, the bill also includes grant money for discretionary projects, which is how the majority of the Ninepipe corridor would need to be funded.

It’s been more than a decade since any major projects on the stretch of Hwy. 93 that runs through the Flathead Reservation have been completed, and that’s mostly due to lack of money, Vosen said. When work began on the Evaro to Polson portion around 2004, the department borrowed money, and has been paying it off at $15 million a year for 20 years, with the final payment made this year.

“There’s not another stretch of road in the state that has a guaranteed $15 million payment for a 20-year stretch,” he added. “Now that’s done and everybody else is saying OK, now you have to come fix our road.”

He pointed out that the Missoula District, which he oversees, not only includes Hwy. 93 from the Idaho border to Canada, but Hwy. 2 and 200, all on a budget of $120 million a year. Reconstruction now costs up to $10 million per mile; overlayments and chip-sealing projects – which Vosen compares to “changing the oil on your car” – also consume a healthy portion of that annual allocation.

He believes the discretionary funds in the federal infrastructure bill offer the only realistic paths forward for big-ticket items like the Ninepipe corridor or the Post Creek Hill project. He points to the City of Kalispell as a good example of a community that’s successfully applied for discretionary grants for road improvements.

“The county, the Tribes, the Department of Transportation and Fish, Wildlife and Parks were all engaged in developing this grant,” he said of the Ninepipe corridor. “It’s truly a collaborative team effort – and that’s what it’s going to take on a lot of these.”

Meanwhile, MDOT did embark on the Ronan North project this fall, which will set the stage for the development of a north-south couplet through Ronan sometime in the future.

Larry and Ky Bartels, owners of the Napa store in Ronan, looked at the plans last Wednesday. The couple is worried about the impact of the highway expansion on their property values.

“I have a building that’s not going to be worth near as much as it used to be,” Larry said. “But that’s progress I guess.”

“It’s going to cost a lot of money and they have no idea when it’s going to happen,” Ky added. “It’s always interesting to see what they’re planning – I just don’t know if I’ll live long enough to see it.” 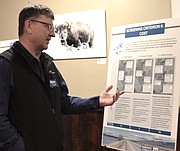