You will not find many more spirited and heated rivalries than Polson and Ronan on the basketball court. Polson won round one of the regular season, surviving a fourth-quarter rally by the short-handed Chiefs for a 61-55 Northwest A Conference victory on Saturday, Jan. 14.

"Rivalry games are fun," Polson Head Coach Jake Halgren said. "Ronan made it tough on us, which we expect from them. We are happy to get a conference win at home. We will need to continue to win in our gym and get some wins on the road down the stretch."

Espn Fisher, who finished with 16 points, iced the game for Polson, knocked down a 3-pointer in the fourth while sealing the game with three free throws in the final 26 seconds.

"Espn played with confidence on both ends of the court and made some key plays in big moments," Halgren said. "His free throws helped us stave off a couple of Ronan runs."

Jarrett Wilson was his typical self for the Pirates, scoring 25 points as Polson opened a 34-17 lead after one half of play.

"Our defense was able to string together consecutive stops, which feeds our offense, and we had more guys playing aggressively and willing to attack offense," Halgren said. "We took better shots on offense which helped limit the easy buckets we gave up against Frenchtown."

The Chiefs are no strangers to adversity this year and battled back with a 16-9 run in the third quarter, and the final stanza was a close affair.

Ronan is still without star player Elijah Tonasket who was injured against Whitefish on Jan. 6.

The win moved Polson to 3-1 in league play, which is good enough for third place in the Northwest A Conference. Ronan fell to 1-4 as they have had league losses to Libby, Browning, and Columbia Falls.

"We need to be more consistent on defense," Halgren said. "Offensively, we need to leverage Jarrett's playmaking ability into getting shots for other players. We need to have a more balanced attack going forward."

Last year, Polson defeated Ronan 56-35 at home and then 56-47 in the Chiefs' gym. They will host Corvallis on Friday and Libby in another conference game on Saturday. Ronan is traveling to Alaska next week for the Alaskan Airlines Classic in Anchorage.

The Lady Pirates had a decade-long streak of losses against Ronan, dating back to when the Maidens played in Class B. That ended, however, on Saturday, Jan. 14, when Polson picked up a thrilling 52-49 Northwest A Conference victory at home.

Ronan led 29-24 at halftime, and for the game, the Maidens were led by Arianna Zepeda's 15 points, Olivia Heiner's 11 points, and Leina Ulutoa's 10.

Zepeda hit a three-pointer with 1:15 left in the fourth to put Ronan up 47-46. Polson's Nikki Kendall hit two free throws to put her team ahead. Zepeda wasn't done as she hit one free throw and then put back her missed second one for a 49-48 lead.

It was here where Hawk came up big, drawing a foul and hitting both free throws. With 29 seconds left, she drew another foul and hit both to second the win.

Ronan is fourth in the conference with a 2-3 league record and a 2-5 record. They will be traveling to Alaska this week to participate in the Alaska Airlines Classic in Anchorage. 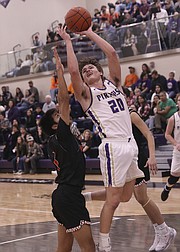 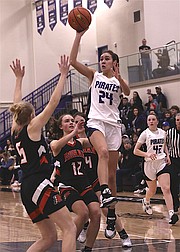