Ronan Food Service employees, from left, are Jen Barney, Tina Hoover and Jenny Nolan prepare meals to be delivered to students in Ronan this year. (Photo provided by Marsha Wartick)

An average of 1,000 sack meals are given out daily at 15 locations throughout Ronan School District since the COVID-19 pandemic hit Montana. (Photo provided by Marsha Wartick)

Ronan School District buses lined up before delivering sack meals at 15 locations throughout the district this year. (Photo provided by Marsha Wartick)

The previous school has clearly been a challenging one.

Schools faced many ongoing changes and adaptations throughout the year as the COVID-19 pandemic progressed. But the Ronan School District was already implementing innovative adaptations to the regular school day for elementary students well before any school closures.

In the fall of 2019, the Ronan Food Service team brought a program called “Breakfast After the Bell” to K. William Harvey and experienced great success in its inaugural year.

The progress and outcome of the program was recognized by the Montana Governor’s Office when First Lady Lisa Bullock awarded one of her four annual School Nutrition Awards to Ronan as it was named School Nutrition Team of the Year.

Ronan Food Service director Marsha Wartick had one main word to describe how she felt as she received the news - “Surprised!” she said with a chuckle.

“I think it felt pretty good for everybody, all the employees were pretty tickled,” Wartick added. “They had worked very hard doing this, so that was nice to be recognized for it.”

A letter to the district stated that the Ronan Food Service earned the recognition because since initiating “Breakfast After the Bell,” school breakfast participation among students receiving free and reduced lunch at K. William Harvey increased to 100% from the previous 57% of students.

“Not only did you make school breakfast more accessible to your students, but your food service team was able to maintain food quality and incorporate food that was culturally relevant,” the letter read.

The main purpose of the Breakfast After the Bell program, which is a nationwide initiative promoted by the No Kid Hungry organization, is to ensure students are fed in the morning to help improve their focus on learning throughout the rest of the day.

No Kid Hungry’s website also states a social impact analysis shows that feeding kids a healthy school breakfast can have a lasting impact on their academic performance, health and even economic futures.

Wartick agrees with this reasoning for breakfast in the classroom.

“The main reason is it really lowers your tardiness in the morning, or missing school in the morning,” she said. “And it also really helps with behavioral problems, when the kids have food in them they’re more settled and their day usually goes a lot better.”

To begin the new breakfast arrangements at K. William Harvey, Wartick said there were a lot of elements that had to be figured out.

The food service team received a grant from No Kid Hungry to start the program and Wartick got busy purchasing the equipment needed to deliver breakfast to the classrooms. Surprisingly, she said pizza boxes worked the best for keeping the food hot during the morning delivery.

She also spoke with the teachers to make sure everyone was on board because it takes everyone in the school to make the program work seamlessly. Wartick explained that some teachers were worried about losing class time, but after working out the kinks they are raving about the difference it’s making for the kids in their classes. Some teachers have found ways to utilize the time while the kids are eating, such as taking attendance or explaining a project for the day.

Wartick has been impressed with how the food service team organized the program and the impact that it is making on the children.

This program was not the only change the Ronan School District Food Service Team made recently. After the closures of schools in March due to the pandemic, the team had to make quick decisions on how it would continue serving the students.

Wartick said her food service workers quickly adjusted to making sack breakfasts and lunches, and began delivering them to 15 locations within the district.

The team also continues to do so throughout the summer, and received a $5,000 grant to help with funding, especially with the extra worker’s wages.

Wartick estimates that prior to COVID-19 the summer sack meal program fed between 150-300 kids and now is feeding over 1,000 children every day.

“A lot more children we’re feeding too… we’ve probably over tripled what we were doing,” Wartick said.

“The ladies did work so hard this year getting this program set up and with everything else that’s happened — it’s been a little crazy,” she said. “It’s just the recognition that, yes we are doing it and we are doing it for the kids, and the impact that it’s had on them.”

Ronan School District buses lined up before delivering sack meals at 15 locations throughout the district this year. (Photo provided by Marsha Wartick) 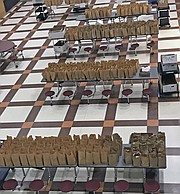 An average of 1,000 sack meals are given out daily at 15 locations throughout Ronan School District since the COVID-19 pandemic hit Montana. (Photo provided by Marsha Wartick)