Joe Cielak, left, won the 2020 Polson Senior Open with a birdie on the first playoff hole Sunday, May 31. Cielak was tied at 144 with three others. (Photo courtesy Polson Bay Golf Course)

Cielak, of Libby, shot matching 72s on both days for a total of 144 in the 36-hole event that featured 124 competitors. It was matched by Tommy Lindell, Ron Ramsbacher and Brad Grattan.

But his birdie on the par 4 No. 1 set him apart to claim the title.

Mike Peissig and Jim Lind each scored holes-in-one at the tournament. Peissig’s ace was on No. 13 while Lind’s occurred on No. 9 today.

Here are the flight winners:

Laura Morrison claimed the Micky Wright flight with a net 148 while Ramsbacher and Grattan each tied for first in the Arnold Palmer flight with gross scores of 144. Lindell had the top net score of 148.

In the Byron Nelson flight, Dan Lieberg had the top gross with 150 while Dan Purcell scored the top net with 152.

In the Jack Nicklaus, Rocky Whisman’s 169 was top gross and Guy Benkelman’s 146 was first net.

There were three flights for players 70 and over.

In the Sam Snead, Jerry Fisher’s 150 was top gross and Tedd Stanisich’s 147 was top net.

In the Jimmy Demaret, Dennis Davis shot a 162 for top gross while Hank Jennings shot a 144 for first net.

In the Harry Vardon flight, Darrell Shoquist carded a 175 for top gross and Mike Heppner scored a 150 for top net. 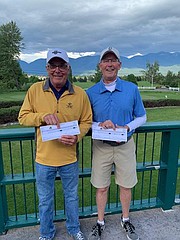