Eula Mae Turnage, 87, passed away peacefully on Oct. 17, 2020 in her residence at St. Joseph Assisted Living in Polson.

Eula Mae was born March 20, 1933 in Great Falls to Ray R. Johnson and Mae (Enquist) Johnson. Her early childhood was spent in and around the White Sulphur Springs area, the source of many treasured memories. Eula Mae’s early schooling took place in country schools at White Sulphur Springs and Monarch, Mont., and Craig, Colo. When she was in the fourth grade the family moved to Polson.

In 1951, Eula Mae graduated from Polson High School as class valedictorian and began working as a bookkeeper at the Polson Creamery. It was during this time, on a break at the Coffee Parlor, when she met Jean Turnage, a young attorney fresh out of law school. Jean and Eula Mae were married Nov. 20, 1952 in Polson. The family grew in 1955 with the arrival of a daughter Patricia, and grew again in 1958 with son Lloyd.

Eula Mae was a devoted mother and wife. She was involved in numerous community activities and organizations. From the VFW Auxiliary to PEO, her commitment to these and other organizations was significant. Eula Mae’s faith played a very important and sustaining role in her life. She was very involved in activities and events supporting Good Shepherd Lutheran Church. She also worked as a poll worker in Lake County and volunteered at the Country Store and Polson City Library for many years.

In 1983, Jean and Eula Mae went on a once-in-a-lifetime trip accompanying Gov. Ted Schwinden’s delegation to Japan and Taiwan.

After the November 1984 election, Jean and Eula Mae moved to Helena and lived there for 16 years while Jean served as chief justice of the Montana Supreme Court. Jean’s time on the court provided many opportunities to travel throughout the United States. Eula Mae and Jean experienced so many places, including Puerto Rico, Williamsburg, Va., Oregon and Mississippi.

Another travel highlight came when they took a European tour with longtime friends Frank and Lulu Stock. Travel stops included France, Germany, Switzerland, The Netherlands, Italy, Austria, Luxembourg and Belgium. They ended the tour by going to England and spent time there with other friends seeing a more close-up view of London and the surrounding area before returning home. Eula Mae often mentioned that this more personal opportunity to see parts of England was the best part of the whole European experience.

Eula Mae enjoyed gardening, reading, staying in touch with classmates, especially enjoying get-togethers with the “Lunch Bunch.” Although she enjoyed playing many types of games, bridge was always her favorite. Bridge clubs and the many friends she played with over the years were important throughout her adult life.

Eula Mae was preceded in death by her parents, Ray and Mae Johnson, her husband, Jean, and her sister, Bernice Brown Peters.

The family would like to thank Marion Cooper and all the staff at St. Joseph Assisted Living in Polson and Partners in Home Care Hospice for the loving, compassionate care and support they provided. May God bless all of you.

As per our mother’s request, memorial gifts can be made to the North Lake County Public Library, Polson, or to the Flathead Lutheran Bible Camp, 603 S. Main St., Kalispell, MT 59901.

Cremation has taken place and a memorial service will be held next year. Memories and condolences may be sent to the family at www.lakefuneralhomeandcremation.com.

Arrangements are under the care of The Lake Funeral Home and Crematory. 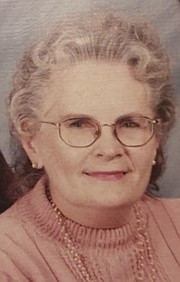