Hayleigh Smith (3) takes the ball up the court against Noxon on Saturday. (Scot Heisel/Lake County Leader)

CHARLO — The unbeaten Lady Vikings of Charlo notched three more wins last week to improve to 8-0 as they continue to establish themselves among the state’s elite teams.

Two of those three wins came against conference foe Noxon. And while their 59-41 win at home Saturday night might seem like an easy task, it was their stiffest challenge of the season.

Charlo stormed out of the gate and dominated the first period. Connor Fryberger did a lot of the heavy lifting early on, scoring both in the paint and at the line. She scored 12 of her 21 points in the first eight minutes and pulled down eight rebounds on the night.

Carlee Fryberger hit a pair of 3-pointers en route to a 16-point night.

The Red Devils managed to stay within 20 points for the rest of the night. When sophomore Avery Burgess hit a 3-pointer with 2 minutes remaining in the third, Noxon reached 28 points. No team this season had scored more than 25 against Charlo in a single game.

“We’re a team that prides ourselves on defense,” Thompson said. “I was happy with our effort, but we sent them to the line too much. Probably more than any team we’ve played this season.”

The Lady Vikings hosted Plains on Friday night and coasted to a 39-point win.

The Lady Vikings got nine rebounds from Hayleigh Smith and eight from Kassidy Cox as they dominated the boards. 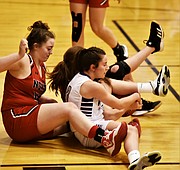 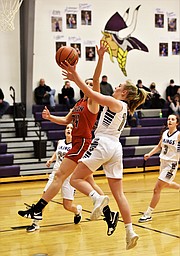