Vikings go out on a win

The Charlo boys made a valiant run to end their season, going 3-1 in four district games over five days en route to a third-place finish. With a 46-42 win at Hot Springs in the district consolation game Saturday night, the Vikings (9-6) were poised to potentially get a challenge game on Monday.

The teams were locked at 22-22 at halftime, and Hot Springs led by four going into the final period. But the Vikings finished with a flurry to grab the third-place finish.

In a loser-out game against Noxon on Friday, the Vikings kept their season alive with a 63-53 win.

Charlo took control of the last two minutes of the first half, and an 11-3 run catapulted them to a 31-24 halftime lead. The Vikings never trailed again.

Sophomore Keaton Piedalue led Charlo with 20 points and he had a couple of baskets in the run. Senior Nathan Clark got to the basket and was fouled twice, hitting 3 of 4 from the line. Senior Roper Edwards, who scored 11 points, also hit from the outside.

Charlo, the No. 4 seed, opened district play with a 47-38 win over No. 5 Plains to get into a semifinal. Their 58-44 loss at No. 1 Clark Fork in that semifinal on Saturday was the only blemish on a great final run.

Scott Shindledecker contributed to this report. 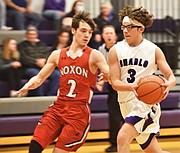