Leiloni Butler was the only senior to take the floor for Arlee. The Falcons are young as well, and didn’t bring a single senior, but their depth advantage was apparent as they had nine players contribute points in a 63-30 win.

The Scarlets kept it close through most of the first period, but the Falcons turned up the heat with a full-court press and started to pull away. Florence-Carlton led 18-9 after the first and pulled away for a 41-15 lead at half.

The game was Arlee’s season opener. Raven Parson and McKirah Fisher paced the Scarlets with eight points each, while Lark Thomas added seven.

Two of Arlee’s key returning players — senior Halle Adams and junior Cheyenne Pablo — were late in joining the team for undisclosed personal reasons. Both were on the bench in street clothes Thursday night.

Arlee coach Missy Tiensvold said she expects to have them ready to play within a couple of weeks.

“We’re pretty young,” Teinsvold said. “Turnovers killed us. We need to clean up those mistakes. If we can rotate the ball and keep going, we’ll be fine.”

In the first game of Thursday’s home doubleheader, the Arlee boys took a 68-51 loss against Florence-Carlton.

The Falcons jumped out early and lead 21-7 after the first period, but the Warriors closed the gap to 30-22 by half.

Arlee was outscored 20-9 in the third, however, and the Falcons maintained the lead from there. 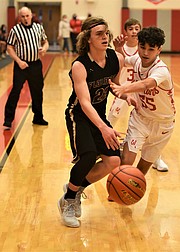 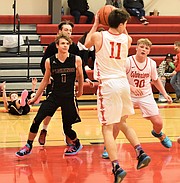