Olivia Clairmont (3) and Leina Ulutoa go up for a block against Libby. (Scot Heisel/Lake County Leader)

RONAN — The Maidens kept their win streak alive and spared themselves a district play-in game with victories over Libby and Browning last week.

Ronan (7-2, 11-2) hosts the Western Divisional tournament Thursday through Saturday and will go in as the No. 2 seed from Northwest A. The Maidens have won five straight matches in straight sets since losing 3-1 at Polson on Oct. 9. Both of Ronan’s losses this season came at the hands of the Lady Pirates (9-0, 12-1), who will be the top seed from the Northwest at divisionals.

Ronan hosted Libby (4-3, 4-8) Thursday night with second place in the conference on the line. The top two teams out of conference play qualify for divisionals, while teams 3 through 6 must advance through play-in games.

Ronan built a 16-9 lead in the second set and maintained a lead of at least four points the rest of the way.

Libby went on an eight-point run behind the service of Julia Martineau in the third to take a 19-18 lead.

Rylie Lindquist delivered an ace for Ronan, but the Maidens lost the next point and trailed once again by a point.

Libby built a 22-20 lead, but the Maidens tied the set at 23-all and put it away with two points on serves from Kylie Fetui.

“When we went to Libby we won the first two, then dropped the third. Got a little sleepy,” Phelan said. “I was proud to see them realize that was happening again and finish the game off strong. There’s a lot of growth from where we were a month ago.”

In district play-in games Monday, Libby defeated Browning 3-2 and Columbia Falls def. Whitefish 3-2. The Loggers and WildKats advanced to the divisional tournament with the wins.

If the Maidens and Lady Pirates both win their first two matches Thursday, they will face off in a winner’s bracket match at 6 p.m. Friday, with the winner advancing to the championship match. 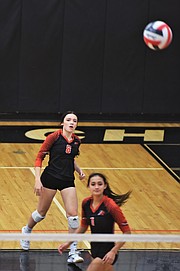 Olivia Clairmont (3) and Leina Ulutoa go up for a block against Libby. (Scot Heisel/Lake County Leader) 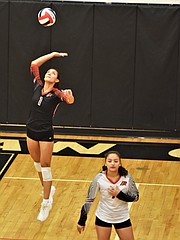