This Grand Champion steer, the project of Jayden Herried, brought $5.05 at the livestock auction at the Lake County Fair. (Marla Hall/Lake County Leader)

Megan Evalo was named the Senior Grand Champion Showman at the conclusion of the large animal Round Robin on Saturday. Her steer earned reserve champion honors in the market beef competition.

Both Brandt Stipe and his cat listen intently to the judge at the Lake County Fair. (Marla Hall/Lake County Leader)

Ryan Walchuck, shown here with her hog, received championship awards for both her hog and her showmanship skills at the Lake County Fair. (Marla Hall/Lake County Leader)

The weather was scorching hot, but despite that, the kids and animals fared well at the Lake County Fair.

The week started with shooting events in Polson on Sunday and the Interview Judging at the Fairgrounds on Monday. The rest of the week was busy with separate shows for the various animals and non-animal entries displayed in the Community Center and Horticulture barn.

On Tuesday the dog projects were featured. The kids did great showing their dogs with only a few of the pups having other ideas about what the day was for. Leo, for example, was all about play —picking up the cones during the rally event and grabbing his leash in his mouth throughout the competition. Bounce showed incredible speed and agility in the agility events and after each time on the course, he retrieved his leash and returned it to his person, Aspen.

Wednesday was a very full day beginning with the market hogs. Many of the swine were rather feisty and several fights started before the crew quickly put dividers between the fighting hogs. After the Senior Showman event a couple of the hogs just did not want to leave the show ring, but eventually the crew was able to scoot them out and direct them to the pig barn.

The cat show followed the hogs in the show ring and, not to be outdone, some of the cats tried to escape — one with good reason as her kittens meowed just outside the ring. After the cats, the poultry showmanship events took place in the same arena. These critters were much better behaved although one chicken did prove that it could fly.

The day concluded with the market beef judging. There were definitely some superb bovine specimens making it difficult to select the Grand and Reserve Champions. In the end, two Charolais steers won the top honors.

Thursday was another nonstop day beginning with the sheep and goat shows and finishing after dark with the Livestock Auction. Between those events, the Fashion Review had some truly excellent seamstresses modeling some of their outfits.

Also, several future 4-Hers participated in the Small Fry Stock Show. The livestock auction, which ran a good 3 hours, was well attended with many, many businesses and individuals purchasing the animals. Jaylynn Buxbaum’s Reserve Champion pig brought in a record breaking $60 per pound.

Friday was the day for the horses. Since the horses are not stalled on the fairgrounds, the competitors brought in their horses for the morning events. Both mini-horses and regular sized horses were shown. The mini’s also competed in a costume event in which Sierra Symington’s white mini performed several tricks. The regular horse events included both halter events and events under saddle. The youngster of the group — a beautiful yearling quarter horse shown by Tanner Berg, got a little rowdy, but Tanner, with his calm demeanor quickly got his equine to behave appropriately.

Saturday began with the judging of the breeding stock and dairy events, plus the showmanship events for both beef and dairy. In the afternoon, the Round Robin Small and Large Animal Showmanship events concluded the 4-H/FFA events. Many of the contestants in the Round Robin had shown several different species throughout the week so the competition was close with no major mishaps when showing the other competitors’ animals.

Overall, the kids and their animals performed very well. They were poised and well-prepared with the energy and enthusiasm that makes for a great fair. Also, the Fair Board, and many club leaders and others worked tirelessly to put on a fair that ran smoothly.

Sjaan Vincent, in particular, was ever present and made everything go off without a hitch—or if there were any hitches, the kids and spectators never saw them. 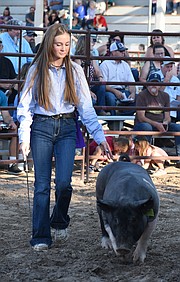 Ryan Walchuck, shown here with her hog, received championship awards for both her hog and her showmanship skills at the Lake County Fair. (Marla Hall/Lake County Leader) 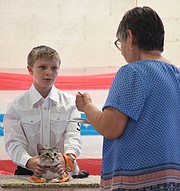 Both Brandt Stipe and his cat listen intently to the judge at the Lake County Fair. (Marla Hall/Lake County Leader)

Megan Evalo was named the Senior Grand Champion Showman at the conclusion of the large animal Round Robin on Saturday. Her steer earned reserve champion honors in the market beef competition.