The two of us became acquainted when we organized Montana’s first Earth Day on the MSU campus in Bozeman in 1970. One year later we both showed up in the Montana Legislature, representing different communities and different political parties, at age 23. In the past 50 years our mutual interest in various issues has brought us together many times — but never with such a sense of urgency as today, regarding our concern for the Earth’s climate.

The recent shocking assessment by the United Nations Intergovernmental Panel on Climate Change, as well as the Greater Yellowstone Climate Assessment (GYCA) focusing on our own piece of the planet, has brought us together ever more strongly to amplify the stark warning of many preeminent climate scientists informing us that world climate change is already causing “dangerous and widespread disruption” to billions of people and countless creatures.

This is not some remote projection. It is now.

The reports make clear that the effects are developing faster than expected, far outpacing our current and rather pitiful efforts to reverse or even adapt to them. For the most part, meaningful public policy to address and adapt to climate change is sorely lacking in Washington, D.C., and also in the Greater Yellowstone ecosystem and Montana as a whole.

Plain evidence of the report’s warnings is in front of us. In Montana we see hotter summers, years of drought, lower snowpack and earlier peak stream flows. Wildfires have become so predictable that the concept of a “construction season” is being replaced by a “smoke season.” If you are a mountain hiker you see any number of dying trees, while down in the plains you see baked ground and no grass.

The impacts, of course, are hammering both wild and domestic species. According to one of the authors of the GYCA, the “average temperature of recent decades is as high or higher than any period in the last 20,000 years, and likely the warmest of the last 800,000 years ...” That puts us in uncharted territory.

If one follows national news, you read of longtime reservoirs drying up, wild weather patterns and the rise of seawater in coastal cities.

If one follows global news, the stories of human and animal misery are too grim to dwell on — drought, water shortages, malnutrition, famine, floods, population displacement and conflict.

Meaningful political discussion on the climate crisis is generally moved to the back burner, displaced by the latest crisis — Ukraine, inflation, voting rights, Covid — all of which are fiercely important and in their own ways connected to climate change, and each requires us to improve our ability to be policy multi-taskers. Otherwise, we “will miss a brief and rapidly closing window of opportunity to secure a livable and sustainable future for all,” according to the 35-page summary of the UN panel’s findings.

These are deadly and difficult truths that world leaders, as a whole, have either ignored or avoided, or that have seemed too overwhelming to address. We cannot continue to focus on the small fire in our backyard while ignoring the inferno that is descending on us from the ridge.

The U.S. and a handful of other top carbon emitters, however belatedly, must lead the world beyond feeble, incremental actions and into a concentrated, bold commitment to convert ourselves to clean energy. The reality is that the industrialized world must provide leadership for massive social transformation.

We must all have a hand in this, whether it is examining our own unsustainable lifestyles, becoming well-informed, speaking out or going to the mat to support committed leaders. The world’s changing climate is the biggest issue of our time — really, of all time. It is also the biggest issue we are ignoring.

U. N. Sec. General Antonio Gutierrez said that climate inaction is no longer an option, and that “delay means death.”

We are approaching our country’s 51st Earth Day. Let’s commit ourselves to ensuring that our planet, and all its species and all its beauty, is thriving 51 years from now. 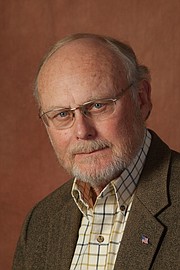