The new bar was erected across from where the previous bar stood. Above the bar are several small windows that were previously hidden. (Scot Heisel/Lake County Leader)

The higher ceiling comes with far more light coming in through windows that were previously hidden. (Scot Heisel/Lake County Leader)

A vintage ceiling light hangs near the bathroom area. The stamped tin tiles are original to the building and were hidden by the previous ceiling. (Scot Heisel/Lake County Leader)

The former Lake Bar in downtown Polson has been dismantled, remodeled and reborn as a new food and drink establishment known as The Durham.

The bar was shuttered last fall for the remodel, with plans to reopen under the new name by the first of the year. The remodel took a bit longer than expected, but business finally resumed last week in a space that will be barely recognizable to past visitors.

Owner Tom Durham personally led the remodel project, which involved removing the previous ceiling entirely. That opened up more vertical space and exposed the vintage stamped-tin ceiling tiles that had been hidden. It also exposed large windows above the doorway and several smaller windows along the east wall. The previous bar has been moved to the side room, and a new bar was erected on the opposite side of the room below those smaller windows.

Durham and his crew also removed the previous interior walls, mostly concrete mortar, so that the original brick walls are now visible from inside. The result is a more classic, rustic setting with far more natural light during the daytime.

“Don’t get me wrong, it was a lot of hard work,” Durham said just hours before the official reopening. “Getting that concrete mortar off of the brick, grinding down the dust, and then applying brick seal. It was a ton of work.”

All new lighting has been installed — new to the site, at least. Durham purchased several of the overhead fixtures from the owner of a 100-year-old building in Wallace, Idaho. Others were brought in from his other businesses. Along with the Polson bar, Durham operates The Old Post in Missoula and two establishments in White Sulphur Springs.

The walls are lined with vintage Montana decor and repurposed light fixtures. A collection of old golf clubs, including one that reportedly belonged to President Gerald Ford, are suspended by fishing line above the space where the previous bar stood.

There’s a mounted moose head on the east wall, and a bison bull on the west wall.

Durham said 90 to 95% of all of the new woodwork was done with repurposed wood from the previous bar and other sites — with the exception of the new bar surface, a long, thin slab of timber with a shiny gloss.

“We tried to reuse as much as we could,” Durham said. “Not only because I’m cheap, but it’s always nice to have the good quality wood.”

Keana Cordier is the new front-of-house manager, and Shelby Schrock, a Lake Bar veteran, is the bar manager.

The kitchen is under the direction of Chef Leina Sims. The menu is the same that was relaunched most recently in 2020, with burgers, pasta bowls, tacos, steaks and various other pub food.

“Our vision is to be a community-oriented space for people to come hang out, chat, get some good food, drink, listen to music,” Durham said. “Eventually, we’re also going to support local artists with art on the walls.”

The bar is just the first step of the remodel. A side room is being rebuilt primarily to host live music “three or four times a week,” Durham said. He’s laying down new flooring and has plans to build a stage area. The old bar is in the side room now. It won’t operate as a bar, but it will provide an additional seating area.

A third, more ambitious phase of the remodel involves creating a lounge area upstairs with a pool table and views of the lake.

“But that’s a project for another day,” Durham said.

The Durham, located at 49494 Highway 93 across from Lake City Bakery, is open 11 a.m. to 12:30 a.m. Monday through Saturday and is closed on Sundays. Follow The Durham - Kitchen and Cocktails page on Facebook for updates. 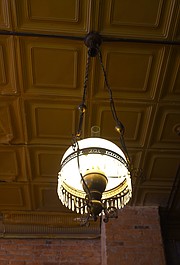 A vintage ceiling light hangs near the bathroom area. The stamped tin tiles are original to the building and were hidden by the previous ceiling. (Scot Heisel/Lake County Leader) 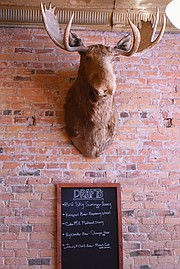 The higher ceiling comes with far more light coming in through windows that were previously hidden. (Scot Heisel/Lake County Leader)

The new bar was erected across from where the previous bar stood. Above the bar are several small windows that were previously hidden. (Scot Heisel/Lake County Leader)