Maggie Todd gets another kill against Columbia Falls on Saturday. (Bob Gunderson)

At Columbia Falls for the Western A divisional championship, the visiting Lady Pirates pushed the undefeated WildKats in the first set. But the host team managed to hold off the charge of the visitors to take the closely contested opener.

Thereafter, Columbia Falls was able to gain greater separation as they swept the next two sets to win the match for the divisional championship.

Maggie Todd led the Lady Pirates at the net with nine kills, while Kobbey Smith served up a pair of service aces. The dynamic duo led the defensive efforts as they combined for four blocks and over 40 digs.

Polson advances to the state A tournament in Sidney as the No. 2 seed from the West and will face the East’s No. 3 seed Glendive in the opening round.

At Polson for a Divisional semifinal, visiting Ronan and the host Lady Pirates would rendezvous for a rubber round of their Rez rivalry wrangles. Polson won a thriller in four sets (see related story).

At Polson for the divisional opening round with Hamilton, the visiting Lady Broncs and the host Lady Pirates engaged in a see saw battle that had to be settled with a fifth set finale.

After Polson had taken a 2-1 set advantage and had Hamilton on the ropes, the Lady Broncs refused to be reined in. The fourth set was tied a half dozen times up through 15 apiece before Hamilton went on a crucial 3-0 run that forced a Polson timeout. The Lady Pirates closed the gap to within one at 19-20 after a Maggie Todd service ace, but couldn't reel in the lead any further to even the sets at two apiece.

One would have anticipated that the Lady Broncs would have been able to capitalize upon the momentum from the previous set into the finale. But their preceding surge had all but evaporated as Polson jumped ahead into the lead with 6-0 and 5-1 runs that forced a pair of Hamilton timeouts in order to stem the bleeding. The Lady Pirates would maintain their margin and advance to the semifinal match. 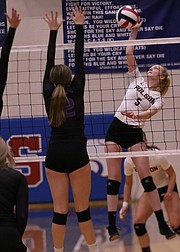 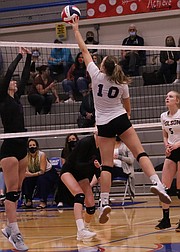